Two police officers and one passerby were shot dead in the eastern Belgian city of Liege on Monday, with officials treating the attack as a terrorist incident.

The attacker was a radicalised "lone wolf" just out of prison who targeted police, according to the prosecutor's office.

The gunman, named by local media as 31-year-old Benjamin Herman, opened fire outside a cafe before moving to a nearby school where he took a cleaner hostage.

He initially followed two female police officers, aged 45 and 53, and then attacked them from behind with a knife, a press conference heard on Tuesday afternoon.

He seized their service weapons and shot them before continuing to his rampage, killing a 22-year-old man in a car that was parked at the scene.

When he left a nearby school — where he took a female cleaner hostage — he was shot dead by police.

Two police officers were injured "around their legs" in the shootout. Students from the school were moved to safety and none were harmed.

La Libre Belgique newspaper quoted a police source as saying the gunman shouted Allahu Akbar — God is great in Arabic — and RTBF said investigators believed the attacker may have had a terrorist motive.

Investigators are reportedly looking into whether the attacker had converted to Islam and had been radicalised in jail.

Belgian Prime Minister Charles Michel said the convict was indirectly mentioned in state security reports on radicalisation “in notes that did not primarily target him, but others or other situations.”

He says the attacks will involve, at least initially, “an investigation for terrorism.”

Look back at the blog below to see how events unfolded.

What we know so far

That's all for our live coverage on the Liege attack

Keep following Euronews for further developments as they happen. 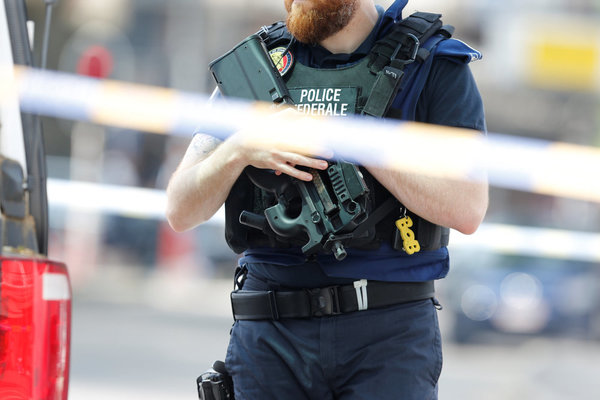 For me it's the act of someone who is not well, who did something unacceptable and serious. Now, I don't think it's a terrorist act like we hear people saying and which could be connected with other things. If the person really wanted to commit a serious action, he could have entered the school and have the option to do something dangerous, make a lot of damage. Beyond that, it's regrettable, it's sad that it happens in our place again. (Lorenzo di Felice)

You walk by, as you do, and you get yourself killed, murdered. He was released from prison yesterday. It's sad, makes you panic. (Monique Leclercq)

Belgian PM calls for 'modesty and respect' for mourning loved ones

Michel said the suspect appeared in the security reports "in notes that did not primarily target him, but others or other situations."

He said the shootings will involve, at least initially, "an investigation for terrorism."

Didier Delfem captured the moment that police shot the suspect.

His video shows police officers with their arms drawn out outside Lycee de Waha.  Several rounds of gunshots can be heard.

"The goal of the assassin was to target the police," Liege police chief Christian Beaupere told a news conference.

A Belgian lawmaker said he had been on an anti-terrorist police watchlist after being radicalised in jail, apparently a convert to Islam — raising questions about why he seems to have been freed unsupervised and expected to return.

Euronews spoke to Victor Jay, 24, a student who recorded video of emergency vehicles and police officers responding to the shooting.
“I thought something like this could happen at any time in Lieges. I thought it would happen on a bus but didn’t think they would attack the police,” he said.

His apartment is about 150 meters from where the shooting took place. When he heard sirens, he looked out the window of his apartment and saw all the police and emergency vehicles he thought "something is happening".
He started recording the video and then heard a succession of gunshots.