In the outskirts of Polish capital Warsaw a truck driver from Ukraine Ruslan Novikov starts the journey in his twin trailer truck. Our journalist Natalia Liubchenkova joins him for nine days.

The cabin of the truck is Ruslan’s home for many months ahead. There is a bed right behind the driver’s seat. Underneath it – there is a storage filled up with products. It is unlikely that he will be home before summer! 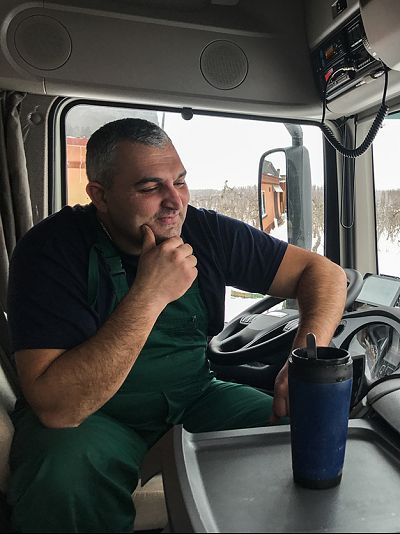 Ruslan’s working week starts with the delivery. He brings empty apple wooden boxes to a farm. While discharging the truck farm owners and the driver are having a friendly chat. This work takes two hours. Another five hours – waiting and working time combined – was spent to load the truck again at another farm nearby.

Unloading and loading the truck took almost all the day, but yet Ruslan is allowed to drive until midnight. Then he stops at the parking lot for the night, warms up his meal on the gas cooker and watches a movie on a PC. He sleeps on the first level bed, the journalist gets on the second. 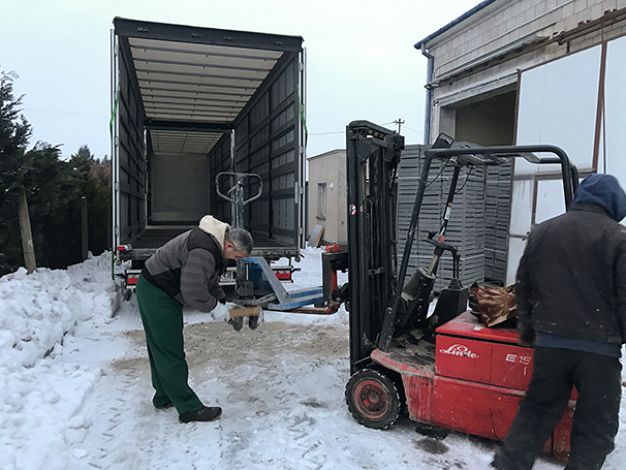 Early the next morning Ruslan brushes his teeth out of the truck’s window, warms up the kettle to make a coffee. He then checks to see if his resting time was long enough.

On the road, parking space or delivery point – the driver has to keep be aware of numerous regulations, take care of paperwork and logistical issues. Driving a heavy vehicle requires a lot of concentration too.

We next travel across Germany, where we drive all day with required stops for 45 minutes every three hours. The driver uses this time to cook and eat a meal. He never eats in roadside cafes. He also fills in the papers, plays games or to catches up with his family and fellow-colleagues on the phone.

Finding a free and safe parking space before his driving time is up for the day is often a challenge. His working days are over mostly late, his leisure time is also spent in the truck.

In the morning of the day three we are crossing the Dutch border to deliver the cargo. Then we drive across the Netherlands to load the truck again. Then our destination is Spain. Ahead are 1420 kilometres through Belgium, Luxembourg, France. 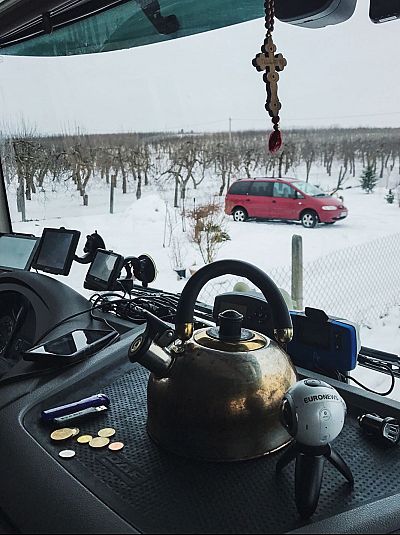 We arrive in Spain on day five, where Ruslan has to take a required 45 hours uninterrupted pause. It’s forbidden to sleep in the truck during this time. Some countries close their eyes on this matter, others conduct strict controls, but the road infrastructure does not seem to be developed enough anywhere. And safety is a big concern too.

““When we have hit the 45-hour working limit we might be in Germany or in France and we can’t move any more because we gonna be fined? In addition, we can’t stop because we will also be fined.You have yet to get to the hotel. The hotel costs 50 euros. You have to take a taxi to get there. And you also have to leave behind the vehicle charged without surveillance. You might return to find the car, the cargo and the fuel gone.”

The 45-hour working week is over. During it the driver has never seen anything but the road or the parking lots. To rest he chooses a parking not far from Tarragona, northeastern Spain. Here the seaside is only 500 meters away! 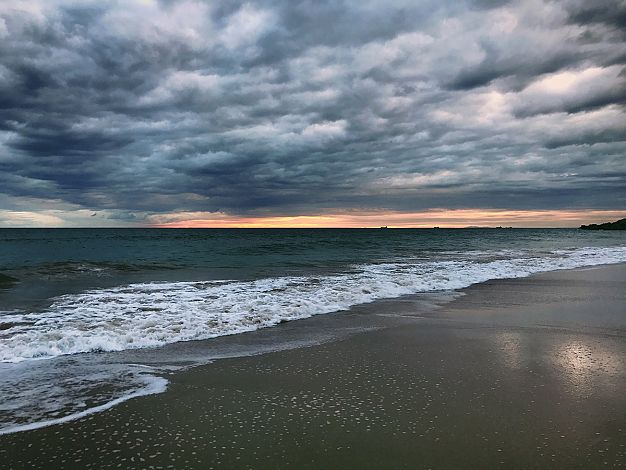 Some drivers say they find it truly restful here, compared with other parking spaces.

Drivers get to meet one another at the weekends in Tarragona. Some of them have known one another for years. Here our journalist meets the drivers from France, Spain, Portugal, the UK and Germany.

After sharing a drink a group of drivers mostly from Portugal go out to cook a meal. As usual they do this on the gas cooker in between the trucks. They eat from a common pot, sing songs and laugh, tomorrow is the start of another week on the road.

We have 3,953 kilometers behind us. All this in nine days and I am about to get off here in Lyon pretty soon.”

This research was enabled by Reportes in the Field, a program by the Robert Bosch Foundation hosted together with the media NGOn-ost