Almost four years of war in eastern Ukraine have cost the lives of 10,000 people, nearly 3,000 of them civilians

The conflict has forced more than 1,5 million people to leave their homes and more than a million to flee the country.

Today, 4 million people in Ukraine are in need of humanitarian aid

The conflict in eastern Ukraine is far from over. This year, 400 civilians have been injured or killed along the contact line separating the government-controlled areas from the pro-Russian separatist regions. That’s more than last year. Not a day goes by without hearing the sound of shelling despite an official ceasefire. We heard it when we visited 80-year old Evdokia Vasilieva Taranenko. She has lived in the village of Pervomaiske for more than half her life. Her home lies just three kilometers from the frontline and has been hit twice. 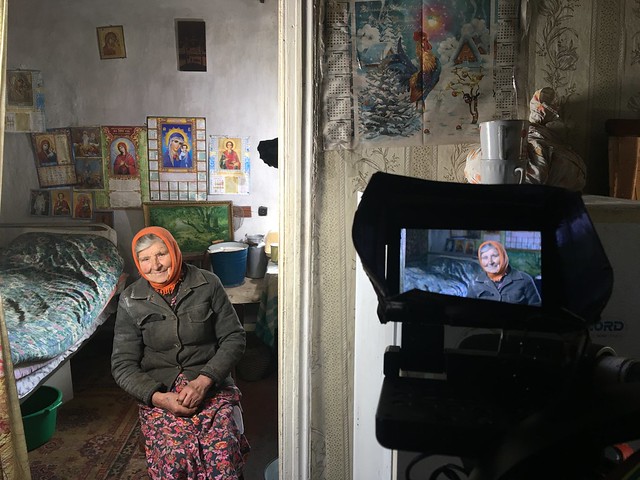 “A bomb fell on the road – it was during the day.” (She points at the broken windows in her house) “The impact broke these windows. I was inside the house when it happened.”

Evdokia has lived with a damaged roof for two years. This autumn, she received help from the EU-backed NGOPeople in Need. It has helped repair 40 houses in the village ahead of winter, mainly restoring roofs and windows.

“In some cases we only give out the material,” says Sergey Saenko, Shelter Programme manager with People in Need. “We give out cash grants as well, so that people can buy the material themselves. Often, as there are very vulnerable people living on the frontline, who cannot carry out the repair work themselves, we provide the material, we choose a local team and we pay for the work.”

The #conflict in #Ukraine will mark a grim, four-year anniversary in April but is playing out relatively unnoticed on #Europe's doorstep irinnews</a> <a href="https://twitter.com/mikeybbq?ref_src=twsrc%5Etfw">mikeybbq: https://t.co/1z2NKTDBJ9

Nearly half of the village’s inhabitants left after conflict broke out in 2014, but they are starting to come back. Today there are 1,500 of them – mainly elderly and unemployed people – living in and repairing damaged houses right next to abandoned ones too dangerous to go near because of the risk of land mines

The conflict in eastern #Ukraine has left the country ranking 5th in the world for civilian casualties as a result of #landmines and other explosive remnants of war.

“This is war. Sometimes our village is hit during the day and nobody understands anything – who’s firing, where it’s coming from. It’s not easy. When night falls, it’s even scarier,” Evdokia tells us.

One night in Kiev and 6am train to the contact line that splits Ukraine in government controlled areas and rebel pro-Russian areas. Along this line people continue to die, but we are going to see how people continue to live coping with this frozen conflict. Next on #AidZonepic.twitter.com/xTfHQPa51p

We travel south to Marinka near Donetsk. The small town is right near the frontline in the so-called Red Zone and experiences frequent shelling. The local population, which is already struggling to get by, is dreading winter. Entire areas have been without gas since the conflict broke out in 2014.

“Right now we have a list of 250 households that are in need of immediate assistance,” says Andrew Meyer, Head of Programs at People in Need. “We decided that one way to provide sort of a permanent solution to the winterization of these homes is to provide these solid-fuel furnaces, which we’ve already installed, and then follow up with firewood that they can use to burn throughout the winter.”

The Czech NGO has reached half of the people in need in Marinka. Each family has received six cubic meters of firewood, which should cover the winter period. For Vitaly Vladimirovich, being an ex-miner was useful in the beginning, but it no longer helps.

“Even after the war started we didn’t have this established border that we have now,” he tells us. “So it was much easier to move coal from one side to the other, and through my connections in the mine, I was able to get coal from time to time, even if I wasn’t working there anymore.”

According to the NGOs working here, the humanitarian situation is getting worse. People are returning to their homes, but they don’t have jobs. The movement of merchandise across the border is limited and goods are hard to get hold of – those that do get through are expensive.

“In the last year and a half, as the contact line has stabilized, we have been targeting specifically those living in conflict-affected areas,” says Mathias Eick of the EU’s Humanitarian Aid and Civil Protection department (ECHO).

The ACCESS Consortium (people_in_need</a>, <a href="https://twitter.com/ACF_France?ref_src=twsrc%5Etfw">ACF_France, DOTW_UK</a> and <a href="https://twitter.com/ACTED?ref_src=twsrc%5Etfw">Acted) calls parties to the conflict, the international community and humanitarian orgs to take further action to ensure that critical needs are met in Eastern Ukraine. https://t.co/Wtfuh1MvNypic.twitter.com/VOqmXCqevJ

Shelter repair and heating are just some of the basic needs of those living along the contact line like Evdokia. According to People in Need the level of food insecurity has doubled in this past year alone.