It was described as one of the most beautiful bridges in the world, built in 1566 and a powerful symbol in Bosnia where East and West came together and Muslims and Christians co-existed happily.

That was before it came crashing down, another casualty of the violence unleashed as the former Yugoslavia fell apart in the early 1990s.

The sight of the Old Bridge at Mostar, which collapsed into the River Neretva after relentless shelling, epitomised the destruction of the Balkans war.

The man said to have trained his artillery on the structure in November 1993 was Slobodan Praljak.

On Wednesday in court in The Hague, proceedings were suspended abruptly as he slumped into a chair, claiming to have just drunk poison in response to the confirmation of his war crimes conviction.

The 72-year-old had been extradited to The Hague in 2004, just as a three-year project to rebuild the Mostar bridge was completed. 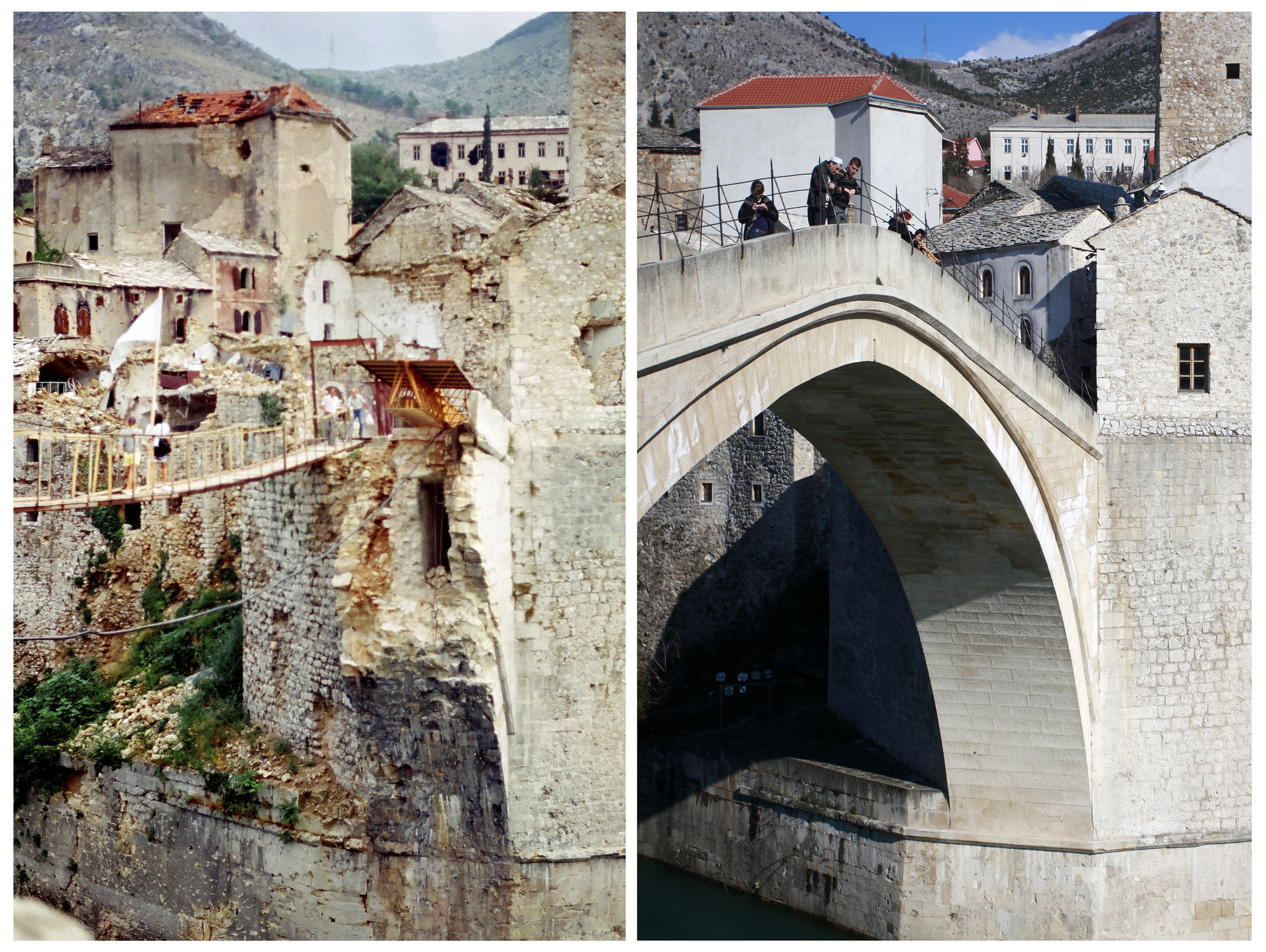 Ten years after the destruction of the old Mostar bridge in 1993 (left), a new structure was built.

From man of culture to man of war

A graduate from Zagreb with three university degrees, Praljak lectured in philosophy and psychology and began working in theatre and television. He worked as a theatre director in Zagreb, Osijek and Mostar in the 1970s and 1980s.

With the outbreak of war, the man of culture became a general and an adviser to Croatian President Franjo Tudjman. He was eventually accused of being responsible for the destruction of the Old Bridge and mosques - as well as for the murder, expulsion and persecution of Muslims.

Slobodan Praljak was one of the "Prlic Five", a group of Croat political and military leaders who went on trial in The Hague. The six men were convicted in 2013 and given jail sentences of up to 25 years. Praljak was handed a 20-year term.

In court, his lawyers argued that the Old Bridge had been destroyed by explosives planted by the Bosnian Army and not when it was hit by Bosnian Croat forces.

However, dozens of shells had been fired at the bridge over two days from Bosnian Croatian positions, leading to its collapse. It was not seen as having any strategic importance and had been used by both communities.

Praljak's forces had been driving Mostar's Muslim population into an east bank enclave. While the Bosnian Serb Army was concentrating its efforts to carve out a new state in the southwest, Bosnian Croat forces employed similar methods of ethnic cleansing to establish their own space. They received significant support from Croatia itself in the process.

Later, the UN war crimes tribunal found that he had failed to make any serious efforts to stop Muslims from being rounded up, murders from being planned, and members of international organisations from being attacked.

His indictment alleged that as a senior military official, he commanded, directly and indirectly, the Bosnian Croat armed forces that committed mass war crimes against the Bosnian Muslim population in 30 districts. As a high-ranking Ministry of Defence official, he was said to have been closely involved in planning and operations of both the military and civilian police. 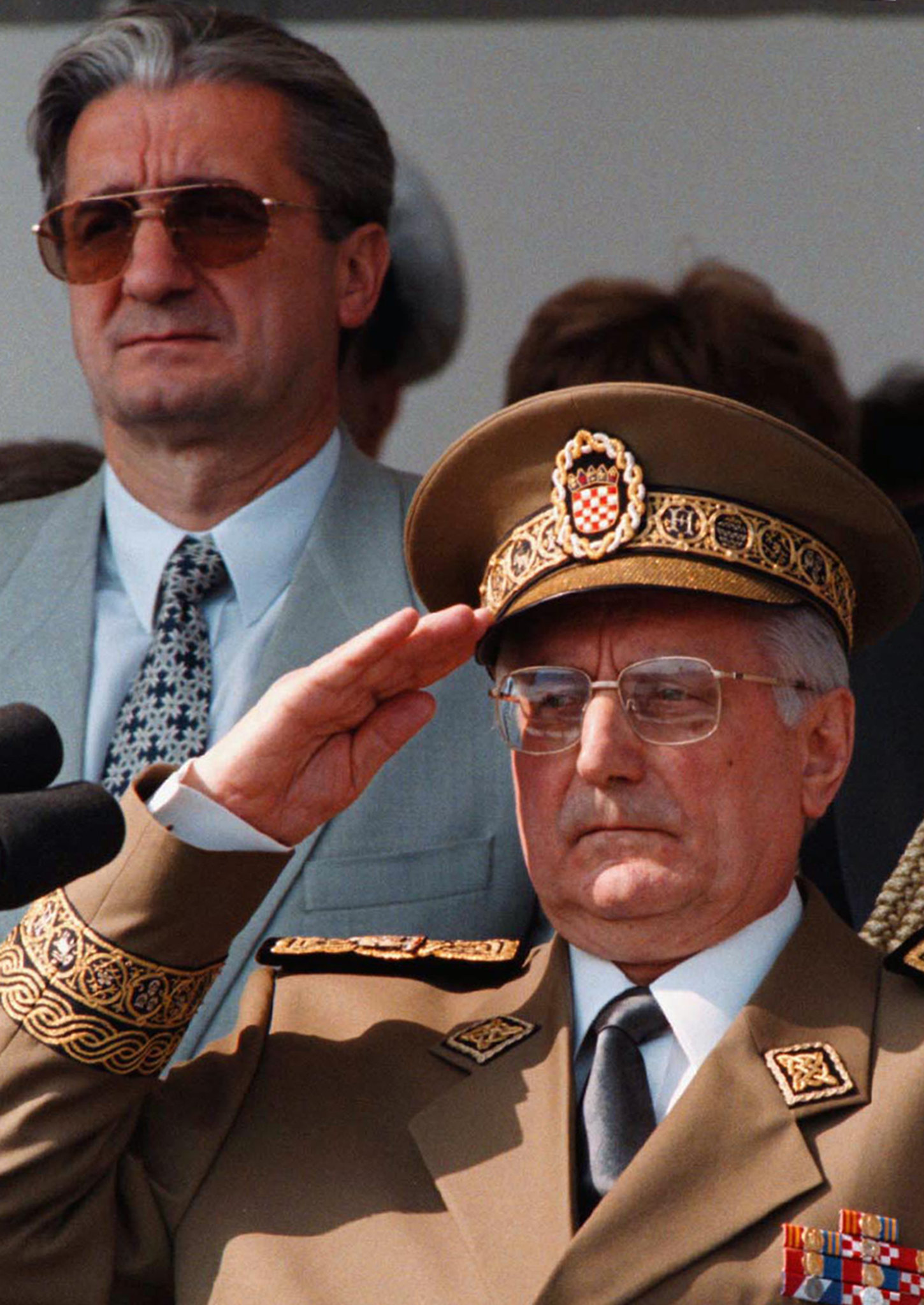 Ex-Croatian President Franjo Tudjman - the trial of Slobodan Praljak and five others helped establish his responsibility in plans to carve out a Croat state in Bosnia.

The trial of the six men lasted from April 2006 to May 2013. The trial judges ruled that murders, rapes, expulsions and torture of Muslims "were not the random acts of a few unruly soldiers".

The judgment helped establish that Croatian leaders—including former President Tudjman, who died in 1999—had helped conceive and execute a plan to carve out a Croat state in Bosnia.

This finding concerning the former leader was also upheld at the recent appeal.

It could be that Praljak's final act of drinking poison in a war crimes courtroom—if that is confirmed—might be remembered more in the wider world than the precise crimes he was convicted for.

The attack on the Old Bridge at Mostar was seen as an assault on multiculturalism and in particular a symbol of the Ottoman civilisation despised by Croat nationalists, a destruction of the idea of bridge-building.

Bosnia-Herzegovina still has deep-rooted problems today—but the rebuilt bridge at Mostar has once again become a symbol for hope. Each year the city attracts thousands of tourists, especially for an annual bridge-jumping event that is seen the world over.