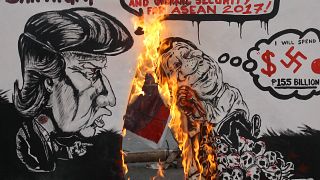 Filipino activists protested outside the U.S. Embassy in Manila on Friday (November 10) against the visit of President Donald Trump to the Philippines for a regional summit.

More than 300 protesters scuffled with riot police and threw black paint at photographs of Trump and his Philippine counterpart Rodrigo Duterte, and later burned a mural depicting caricatures of the two presidents.

Trump is due to arrive in Manila on Sunday to meet southeast Asian leaders and attend the ASEAN Summit in the final leg of his five-country Asia trip.