The Second Amendment to the United States Constitution guarantees that “the right of the people to keep and bear Arms shall not be infringed”.

Indeed, each time US gun laws come into question in the wake of a mass shooting or killing spree, weapons enthusiasts insist that the constitution is not to be touched.

The fundamental right of US citizens to bear arms, implemented in 1789 when post-revolutionary America was emerging from under the thumb of British colonial rule, was at the time seen as a preventative measure against those who would seek to control them.

Almost 250 years later and the firearms industry has become one of the biggest businesses in America and the pro-gun lobby one of the most powerful in Washington DC. But just how easy is it to get your hands on a firearm?

After it was revealed that Texas Church Shooter Devin Patrick Kelley managed to legally purchase guns despite being blacklisted for a domestic violence conviction in 2012, it appears that measures to prevent convicted felons from purchasing guns at one of America’s 64,417 firearms retailers don’t always work.

Stores that sell guns in the US must use a database called the National Instant Criminal Background Check System (NICS) to comb through their customer’s records.

It scans three federal databases – the National Crime Information Center, the Interstate Identification Index and the NICS Index for a match.

If a purchaser has been convicted of a felony, or misdemeanours with sentences exceeding two years, or has been declared “mentally defective” by a court, then he or she won’t pass the background check.

Customers are asked to fill in a form that asks them for their name, address, place of birth, race and citizenship. Although a social security number is recommended, providing one is listed as “optional”. 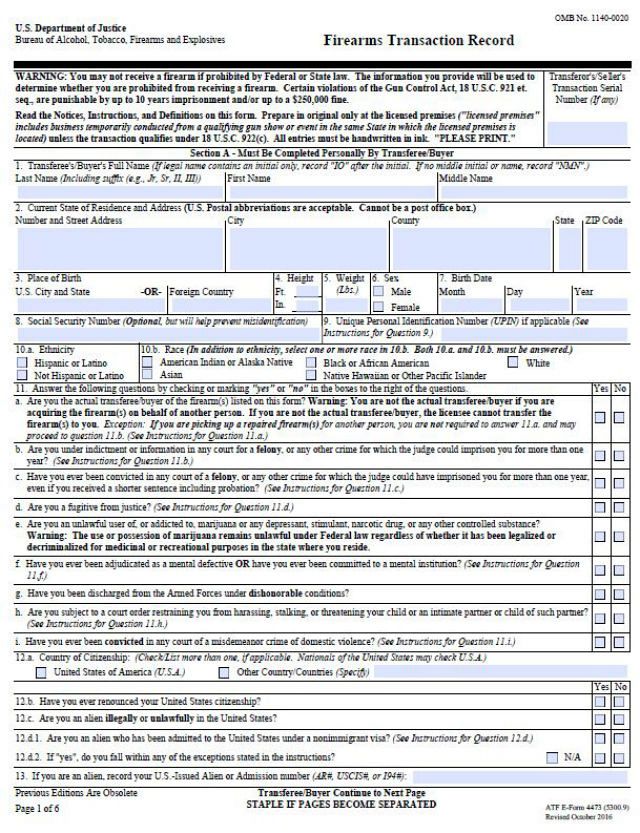 On completion of the form, the retailer will call the FBI, which will, in turn, run the necessary checks. The whole process can be completed in just a few minutes.

How is it then that Kelley, who was convicted of domestic abuse by a US Air Force court-martial and sentenced to a year in confinement, managed to obtain four weapons from two different retailers in two different states?

In this case, a simple clerical error was to blame.

Kelley slipped through the cracks in the system because an Air Force officer failed to enter his details into the NICS, meaning that when he filled out the background check at the stores in Colorado and Texas – making sure not to tick the box indicating he had a disqualifying criminal history – no red flags were raised.

Unfortunately, Kelley’s case is not unique.

In the aftermath of the 2015 Charleston church shooting, The Washington Post reported that FBI Director James Comey said that the killer, Dylann Roof “was able to purchase the gun used in the attack only because of lapses in the FBI’s background-check system”.

Roof had a prior police record consisting of two arrests, both made in the months preceding the attack.

He was also investigated during this period, although he wasn’t arrested or charged.

The gun he used to murder 10 people was purchased legally from a South Carolina gun store.

One way to circumvent the criminal background check, however, is to visit one of the seemingly endless list of guns hows that occur every weekend across the country.

Under federal law, private-party sellers are not required to perform background checks on buyers, whether at a gun show or other venue, nor are they required to record the sale, or ask for identification.

This “secondary market” poses a conundrum when it comes to gun control.

A loophole exists in federal law under which “any person may sell a firearm to an unlicensed resident of the state where they reside, as long as they do not know or have reasonable cause to believe the person is prohibited from receiving or possessing firearms”.

While Chapter 18 Section 922 of the United States Code stipulates that it is unlawful for any person “except a licensed importer, licensed manufacturer, or licensed dealer, to engage in the business of importing, manufacturing, or dealing in firearms, few such provisions exist for those purchasing firearms.

‘A mental health problem at the highest level’

President Donald Trump’s immediate response to the Sutherland Springs shooting was to blame mental health, rather than a lack of gun control for Kelley’s actions.

In February this year, the White House overturned an Obama administration rule designed to keep firearms out of the hands of some people deemed mentally ill.

Schizophrenics, manic depressives, PTSD sufferers and unconvicted drug addicts are at liberty to obtain a firearm as long as they keep their condition a secret and have not been adjudicated mentally defective by a court.

One hurdle they may have to jump over would be the licensing and purchase-permit laws of the state in which they buy the gun.

But few states are subject to strict licensing laws, and most do not require any form of owner license or purchase permit at all.

Out of 50 states, 35 do not require that gun owners hold a license, obtain a purchase permit, or register their weapons.

In fact, some states are actively against it. Laws in states such as Idaho and Alaska prohibit authorities from registering firearms or enforcing any local ordinance that regulates the registration of firearms.

Only the District of Columbia – where Washington DC is situated – and New York require gun owners to hold all three, and even so, there is nothing to stop a resident of the Big Apple crossing the border into neighbouring Pennsylvania to buy a gun.

While most states do require a gun owner to hold a licence to carry their weapon on their person in public, those in breach of this law are rarely caught unless they are stopped and searched by the police.

The US appears to be trapped in a cycle Democrats pleas for action on gun control and Republicans stand firm under the watchful eye of influential gun lobbyists.

The likelihood of any alterations to the constitutional right to own and bear arms during Trump’s presidency is virtually nil.

But it has been amended before, and any changes on the horizon remain to be seen.