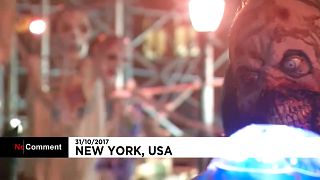 New York City’s Halloween parade went ahead as scheduled after the deadly attack in Lower Manhattan where eight people were killed an 11 injured.

There was increased security along the route as extra officers, heavy-weapons teams were deployed as a precaution.

Scores of people in costumes marched through Greenwich Village, with many saying it’s important to keep going on with life.

One parade goes, Stephen Senino said:’‘ I think this is a positive thing ( the parade), we’d never cancel it, it’s such an important thing. With the stuff going on at the moment we just have to move on and enjoy today. I mean God bless everybody. It’s terrible what has happened.’‘