The winners of the Wildlife Photographer of the Year have been announced today at the Natural History Museum, in London.

Brent Stirton from South Africa was the grand title winner with his photo ‘Memorial to species’. It pictures a dead rhinoceros who was hunted for its horns. Stirton was also the winner of the Story category.

Roz Kidman Cox, Competition judge, has shared her opinion on Stirton’s composition: “To make such a tragic scene almost majestic in its sculptural power deserves the highest award. There is rawness, but there is also great poignancy and therefore dignity in the fallen giant. It’s also symbolic of one of the most wasteful, cruel and unnecessary environmental crimes, one that needs to provoke the greatest public outcry.” 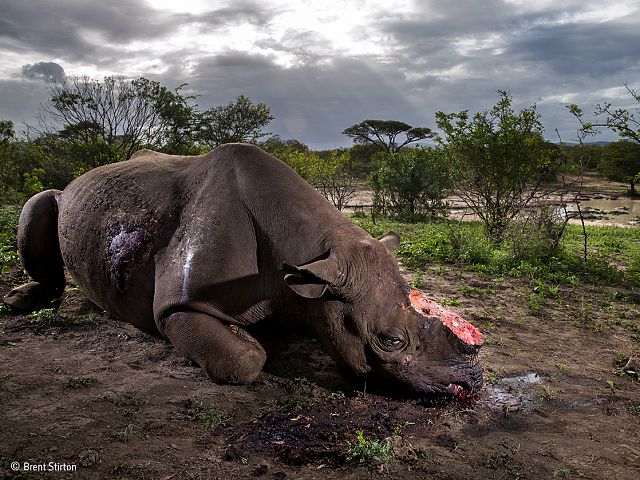 The official caption of Stirton’s masterpiece reads:
“The killers were probably from a local community but working to order. Entering the Hluhluwe Imfolozi Game Reserve at night, they shot the black rhino bull using a silencer. Working fast, they hacked off the two horns and escaped before being discovered by the reserve’s patrol. The horns would have been sold to a middleman and smuggled out of South Africa, probably via Mozambique, to China or Vietnam. For the reserve, it was grim news, not least because this is where conservationists bred back from near extinction the subspecies that is now the pre-eminent target for poachers, the southern white rhino. For the photographer, the crime scene was one of more than 30 he visited in the course of covering this tragic story.”

Daniël Nelson from The Netherlands was the grand title winner of the Young Wildlife Photographer of the Year category and of the 15-17 years old category. ‘The Good Life’ depicts a gorilla, Caco, eating an African breadfruit in the forest.

“This intimate scene of a gorilla lounging on the forest floor is peaceful, a state of being we would wish for all these magnificent creatures,” said Daniel Beltra, competition judge and previous grand title winner. 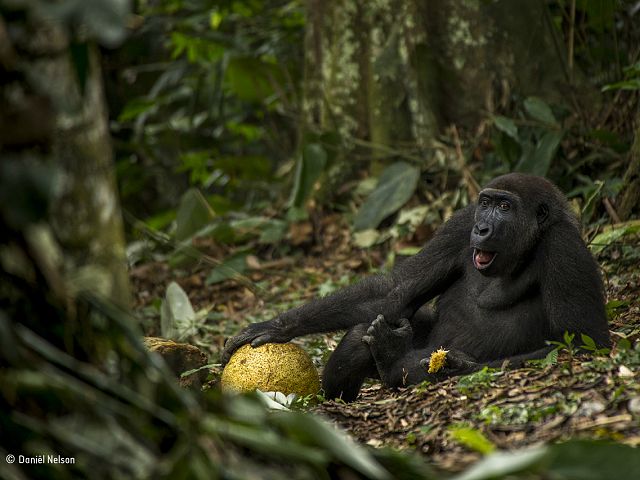 Nelson’s photo is further explained by the following caption:

” Daniël met Caco in the forest of Odzala National Park in the Republic of Congo. A three-hour trek through dense vegetation with skilled trackers led him to where the 16 strong Neptuno family was feeding and to a close encounter with one of the few habituated groups of western lowland gorillas. In the wet season they favour the plentiful supply of sweet fruit, and here Caco is feasting on a fleshy African breadfruit. Caco is about nine years old and preparing to leave his family. He is putting on muscle, becoming a little too bold and is often found at the fringe of the group. He will soon become a solitary silverback, perhaps teaming up with other males to explore and, with luck, starting his own family in eight to ten years’ time. Western lowland gorillas are critically endangered, threatened by illegal hunting for bushmeat (facilitated by logging and mining roads), disease (notably the Ebola virus), habitat loss (to mines and oil palm plantations) and the impact of climate change. In his compelling portrait of Caco – relaxed in his surroundings – Daniël captured the inextricable similarity between these wild apes and humans and the importance of the forest on which they depend.”

Here are all the other winning pictures of this year’s prize by category (scroll down to see the picture album): 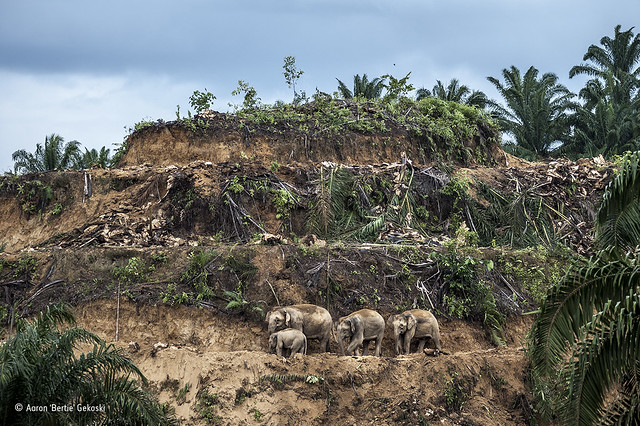 This year, the competition had approximately 50,000 entries from 92 countries. All the winning images will be exhibited at the Natural History Museum in London on Friday 20 October. The exhibition will then tour across the UK and overseas to Canada, Spain, the USA, Australia and Germany.