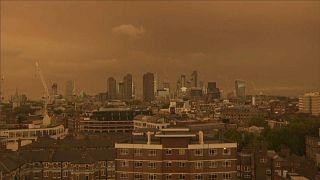 Hurricane Ophelia brought dust from the Sahara and smoke from wildfires in southern Europe that turned the sky over London an unusual shade of yellow.

British media were comparing Ophelia with the “Great Storm” of 1987, which subjected parts of the United Kingdom to hurricane-strength winds 30 years ago to the day.

The Irish government said the storm was likely to be the worst since Hurricane Debbie, which killed 11 in Ireland in 1961.

It passed close to a western Ireland golf course owned by U.S. President Donald Trump, who has been planning a wall to protect its greens from coastal erosion.

Similar storms in the past have changed the shape of stretches of the Irish coastline, climatologists said.