As part of our special coverage ahead of the German elections, we travel to Germany’s deep south, in the state of Bavaria. As the election draws near, tensions are running high in small towns, particularly on core issues such as immigration.

There is no war in Senegal. But when you wake up in the morning and you have nothing to eat, this, too, is a kind of daily battle.

Disagreement centres on how to integrate migrants into the labour market. Who should be allowed to stay and who should be sent back home?

On a building site, we meet Thiare Ousseynou, an apprentice at ABS Kugelmann GMBH. Thiare is from Senegal, a country German authorities consider as safe. Political asylum is difficult to obtain for migrants from such countries.

“When your parents back home are hungry, then it should be OK if their relatives manage to make their way to Europe so they can help out their parents in need,” he says. “There is no war in Senegal. But when you wake up in the morning and you have nothing to eat, this too is a kind of daily battle…”

While the Conservatives and Social Democrats are calling for repatriation agreements to be drawn up with African countries, Green and left-wing politicians oppose such deals.

Thiare’s boss has a high opinion of him – and would like to keep him.

“He speaks good German. But a written test is a real problem. He has no problem communicating with colleagues on the building site, but if he does not pass the written test now he won’t get his certificate… and he will be threatened with deportation. Why should someone like him leave Germany? His country of origin should not matter. Germany needs qualified workers like him,” says Adolf Kugelmann. 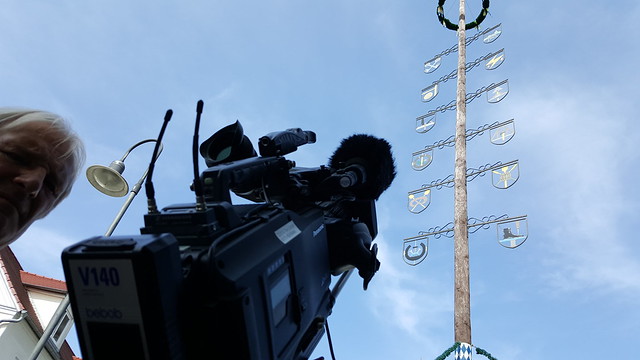 Our next stop is Pfenningbach, on the boarder with Austria. This village of 300 people is preparing to take in 102 asylum seekers. Many in the village say they agree to welcome some refugees, but not that many.

“The local council voted unanimously against the decision. But this local vote was simply ignored by the county council,” says local resident Franz Fuchs.

“In our street, there are 12 houses with 25 residents. And now they want us to integrate 102 asylum seekers!,” exclaims another resident, Martha Danninger.

“It won’t work out,” adds Christian Erntl, who’s also part of the conversation. “You can not squeeze 102 people into such a tiny place. Moreover these 102 people are mostly men from different countries. This will inevitably lead to tension and conflict.”

“It doesn’t matter whether there are 102 Syrians, 102 Afghans or 102 Bavarians… when people live squeezed together like that it leads to conflict: first within the group, and then it will spread,” says Martha’s brother Franz.

Keep on smiling and learn the language – that’s the advice Rias Khan gives people when asked how to integrate into the labour market and into German society. We are in Parsdorf, close to Munich. Rias is from Pakistan. The manager of the garden center where he works received an “integration award” from the federal government for his efforts to help integrate immigrants. But the local authorities won’t give Rias a permanent resident’s permit.

“I received vocational training, but I also received a deportation order. I do not know if I will be able to to stay or not,” he says.

Rias’ colleagues as well as his boss at the garden centre are very supportive.

“The problem is that workers should be protected from deportation during the three years of vocational training and two years after that. But this protection depends on their country of origin. If it is considered a safe country, the trainees face problems with the public authorities and need special approval,” says Sonja Ziegltrum-Teubner, manager at the Bayerische Blumen-Zentrale GMBH in Parsdorf.

Back in Munich, we meet the chief executive of the Chamber of Commerce and Industry, Peter Driessen. According to him, about one third of refugees last year received some kind of training or job. But full integration into the German labour market takes at least seven years. The biggest obstacles, he says, are language, housing and bureaucracy.

What should the priority be for the next German administration, we ask him.

“We need to introduce a cut-off date. The procedure needs to be facilitated for all those who arrived before the spring of 2016. We need to cut all this bureaucratic red tape,” he tells us.

While most political parties and a huge number of voters are in favour of granting protection to those who are persecuted, a growing number of people do not welcome economic migrants.

We will find out soon whether voters will sanction Angela Merkel for her refugee policy. Join us on Euronews for our live coverage of the German elections on September 24.