The last time Jean-Claude Juncker took Europe’s pulse its blood pressure was sky-high as it battled Brexit, populism and the refugee crisis.

Standing before MEPs last September, Juncker used his annual State of the Union address to admit the European Union was having an existential crisis.

He made a now familiar complaint about a lack of togetherness among member countries and bemoaned the bloc’s economic problems.

But, a year on, has much changed? Here we examine progress by looking at six key points from his speech 12 months ago.

Is the EU still as fragmented as ever?

What happened: Juncker’s hands have been somewhat tied in terms of what he could do to make the EU more cohesive, Judy Dempsey, a non-resident senior fellow at the think tank Carnegie Europe, told Euronews.

“What’s changed is the feel-good factor because of the election in France and the fact the Dutch overcame their problems but that does not make a united Europe.”

She said post-Brexit it’s clear there would be a two-speed Europe in terms of further integration, which doesn’t exactly help mend the fragmentation.

Also, Dempsey added, the loss of Britain as a moderator to the power of the French-German axis is alienating Eurosceptic countries such as Poland and Hungary, both of whom have clashed with Brussels in recent months.

“Maybe the fragmentation is selective – it depends on the issue.

“But I think more and more the fragmentation is being compensated by a growing realisation of the threats facing Europe: terrorism, security and dealing with China. These long-term issues unite most European states.” 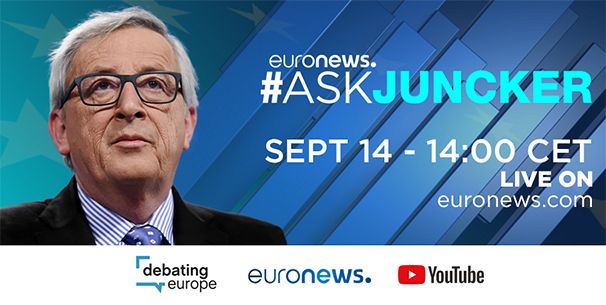 How are Europe’s unresolved economic problems?

What he said:“First of all, we should admit that we have many unresolved problems in Europe. There can be no doubt about this. From high unemployment and social inequality, to mountains of public debt … every one of Europe’s member states has been affected by the continuing crises of our times.”

What happened: While it is arguable how much influence Juncker and the European Commission can have on key economic indicators, the statistics suggest it has been a better year.

The unemployment rate for the EU has come down, from 8.4 percent when Juncker spoke in September last year, to 7.7 percent in July 2017, the latest month for which data was available.

By way of comparison, the unemployment rate in the US was 4.4 percent in June of this year, down from 4.9 percent in the summer of 2016.

Youth unemployment, a major problem in the bloc since the financial crisis, has dropped from 18.3 percent in September 2016 to 16.9 percent by July 2017.

There are no figures to measure social inequality over the last year, but government debt, as a percentage of GDP, was 91.2 percent in 2016’s second quarter, dropping to 89.5 percent by the first quarter of 2017.

The bloc’s GDP rose by 2.1 percent in the first quarter of 2017, compared with the same period the previous year.

“The last 12 months has been good in terms of economic growth, unemployment and job creation,” said Guntram Wolff, director of Bruegel, a think-tank that specialises in European economics.

“The European Central Bank (ECB) has done a good job in supporting demand and supporting the recovery.”

But, added Wolff, the ECB had been slow on helping problematic banks in countries such as Italy

“These banking issues have direct implications for wealth inequality and job creation. Here the record is more mixed,” he told Euronews.

Is there any more solidarity in Europe?

What he said: _“There are many young, socially-minded people in Europe willing to make a meaningful contribution to society and help show solidarity. Solidarity is the glue that keeps our Union together.

“And when it comes to managing the refugee crisis, we have started to see solidarity. I am convinced much more solidarity is needed. But I also know that solidarity must be given voluntarily. It must come from the heart. It cannot be forced.

“I want this European Solidarity Corps (ESC) up and running by the end of the year. And by 2020, to see the first 100,000 young Europeans taking part.

“Young people across the EU will be able to volunteer their help where it is needed most, to respond to crisis situations, like the refugee crisis or the recent earthquakes in Italy.”_

What happened: The refugee crisis has exposed continuing divisions within the EU, most notably with Poland and Hungary.

But efforts by Juncker to foster a stronger generation of pro-Europeans – namely by setting up the European Solidarity Corps – has got the backing of young people, according to the European Youth Forum (EYF).

The idea is to allow young people to easily find volunteering projects both at home and elsewhere in the EU.

Andrea Casamenti, board member of the EYF, told Euronews the new initiative was essentially a rebranding of the existing European Voluntary Service. Thus it’s difficult to give Juncker too much credit over getting it set-up quickly.

Casamenti also said Juncker’s ambition of having a 100,000 youngsters signed up by 2020 was optimistic.

But he added: “In general we support this initiative and we hope the focus is on volunteering opportunities for young people

“For young people to participate in this the opportunities that this programme offered have to be ones of quality.”

There are however concerns that young people are not being involved enough in designing how the scheme will work, according to EYF’s position paper on the new scheme.

Is Europe being kept safe?

What he said:“We will defend our borders, as well, with strict controls, adopted by the end of the year, on everyone crossing them. Every time someone enters or exits the EU, there will be a record of when, where and why.”

What happened: Border security has been beefed up over the last year but an entry-exit system is unrealistic before 2020, according to Raphael Bossong, a researcher at the Institute for Peace Research and Security Policy.

The EU has for years relied on the Schengen Information System to check non-EU citizens as they went in and out of the bloc, Bossong told Euronews.

But, as of April 2017, all EU citizens were meant to be checked against a database of police records, hence delays at some airports over the summer.

However, said Bassong, there are question marks over whether the checks have been taking place everywhere.

“I would give Juncker and the European Commission seven-out-of-10 for being pushy and beefing-up border security,” he said.

Bassong added the entry-exit system implied by Juncker in the second sentence was not going to happen this decade and that critics claim it would be an expensive, mass data collection exercise that hadn’t been proved will help catch terrorists.

What he said:“The Commission, the Parliament and the Council have jointly decided to abolish mobile roaming charges. This is a promise we will deliver. Not just for business travellers who go abroad for two days. Not only for the holiday maker who spends two weeks in the sun. But for our cross-border workers. And for the millions of Erasmus students who spend their studies abroad for one or two semesters. When you roam, it should be like at home.”

What happened: Juncker famously admitted to not owning a smartphone but that has not stopped him delivering on abolishing roaming charges, according to Johannes Kleis, communications director of European Consumer Organisation BEUC.

“The European Commission has delivered on these proposals on June 15, 2017, and we have welcomed this and we think it’s an excellent delivery of the proposals and something we have been asking for and waited for for many years.

“It makes sense if you look at the bill shocks that consumers were faced with for many years. They had to pay hundreds of euros when they got home.

“People in Europe travel for a variety of purposes and the roaming charges were hampering people doing that.”

The European Commission says the dismantling of roaming fees was “the culmination of a 10-year journey where the EU drastically reduced charges before phasing them out entirely”.

A spokeswoman told Euronews the next target was to have free WIFI hotspots in squares, town halls, parks and other public spaces by as early as next year.

Is copyright law any stronger?

What he said:“I want journalists, publishers and authors to be paid fairly for their work, whether it is made in studios or living rooms, whether it is disseminated offline or online, whether it is published via a copying machine or commercially hyperlinked on the web.”

What happened: Proposals to improve copyright law are only likely to benefit larger publishers, according to Joe McNamee, executive director of European Digital Rights.

He told Euronews that it would not be fairer for journalists or authors.

“The rather chaotic, widely-criticised, proposed Copyright Directive is currently wending its way through the legislative process.

“A committee vote in the European Parliament is expected in October and the Council is expected to take a position around the end of the year.

“The proposal would do little or nothing in terms of fairness. It creates a chaotic new right for press publishers, which would benefit publishers but not journalists.

“It basically restricts quotation rights and creates confusion around the right to hyperlink or quote in social media or on services such as Wikipedia.

“Research was published recently to suggest that the direct gains from this new right would be minimal. The measure was already tried in Germany and Spain and failed completely.”

“Modernised copyright rules will improve cross-border access to online content while guaranteeing that journalists, publishers and authors are also paid fairly for their work in the digital environment.”