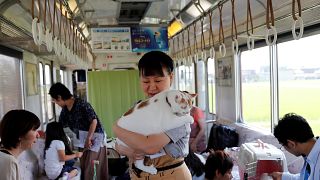 Passengers on a local train in Gifu prefecture were pleasantly welcomed by meowing companions on Sunday, (September 10), at an event hosted by a local train operator and an NGO hoping to bring awareness to the culling of stray cats.

About thirty cats roamed freely on a moving train, where some passengers mingled with the felines while others enjoyed lunch boxes and tea.

Mikiko Hayashi, a passenger from Hyogo prefecture who owns two cats that were strays, said the event is an effective way to raise awareness of stray cats and the situation they’re in. Kyoko Suzuno, another passenger who owns cats, travelled from Tokyo just to attend the event.

The event, hosted by Yoro Railway Co Ltd and Kitten Cafe Sanctuary, was held to bring awareness to the culling of cats. Although the number of cats admitted to shelters and culled has dropped significant over recent years, some are aiming for no culling of cats at all.

Dogs are more popular than cats in Japan, but Pet Food Association data shows that cat ownership is on the rise. The country’s cat population is now around 9.8 million.