Authorities in Houston, Texas, are bracing for another deluge as efforts to evacuate residents after the first wave of flooding continue.

Harvey came ashore on Friday. It was downgraded to a tropical storm, a categorisation that little conveys the trail of destruction it left in its wake. 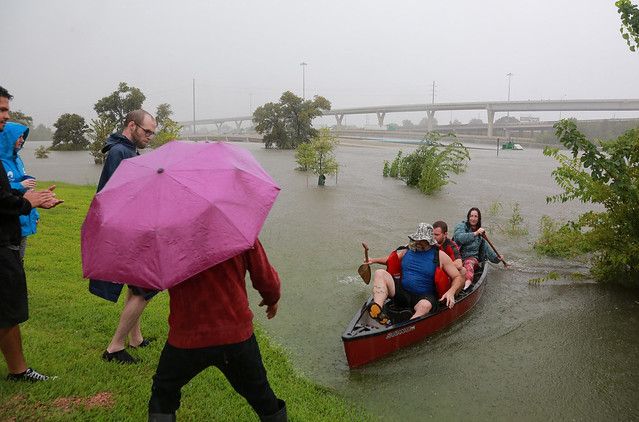 A year’s rainfall in one week

More than 76 centimetres of rain has already fallen in some parts of the city. Rivers and channels overflowed their banks causing chest-deep water in some streets.

With a further 38 to 63 centimetres predicted over the coming days, the National Weather Service has said that Texas could see a year’s worth of rainfall in just a week.

A river runs through it. My usual freeway entrance here in Houston. #Harveypic.twitter.com/b4F40KXAhq

With emergency services stretched thin, local people are on the frontline.

“Our day has been spent focusing primarily on life and safety issues, trying to make sure people get out of harms way. As you know at noon I asked for volunteers to come forward with boats and high water vehicles, the response, I don’t have an exact number but it’s been gratifying to say the least.

One such example was provided by the neighbours who resuced 88-year old Marie Bartlett when the ground floor of her home of 40 years was submerged. She did not want to leave, but was helped into a boat and carried to safety.

With roads impassable, however, many residents have been told to stay put, avoiding attics where they could become trapped, but getting up onto the roof of their house if necessary.

Authorities have urged people not to call 911 unless their lives are in immediate danger.

Before and After images of Interstate 45 North on the White Oak Drive Overpass in Houston, Texas