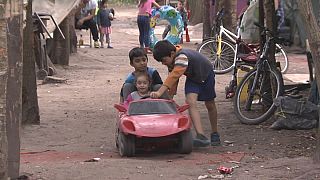 The “jungle” in Calais may have been swept away and migrants no longer cluster in such large numbers at the Channel looking for ways to enter Britain, but they are certainly visible in Paris.

Thousands of migrants are are living in tents on the pavements of northern and southern Paris, including dozens of unaccompanied children. French president Emmanuel Macron has asked his interior minister Gerard Collomb to produce plans to process asylum requests more rapidly so that the authorities can decide, within a maximum of six months, who is granted refugee status and who will be deported.

Until then the daily misery of the migrants continues.