How can isolated and vulnerable rural communities prepare for catastrophic natural events and become more resilient in the face of climate change? This episode of Aid Zone takes us to Bolivia, where an EU-funded project is helping traditional healers share and enrich their ancestral knowledge.

When floods and other disasters hit isolated rural communities in Bolivia, traditional medicine is often all they have in terms of health care.

Over twenty indigenous communities are regularly flooded in the Amazon basin of Bolivia. That’s the case of Capaina, near San Buenaventura, along the river Beni. About 25 families of the Tacana ethnic group live there. Natural disasters can isolate communities for months, and traditional medicine then turns out to be the most effective first response to diseases.

Doña Juanita and Doña Antonia are curanderas, or local healers: they know how to use plants to look after people.

“When we have disasters caused by the river, the wind, there’s no money to go to the hospital. So these medicines are quite good to have when all these disasters happen,” says Doña Juanita, who started learning about plants when she was a child.

“I would go to the jungle with my granny and see how she would take some bark to boil it,” she explains. The bark she shows us is said to effectively relieve pain. 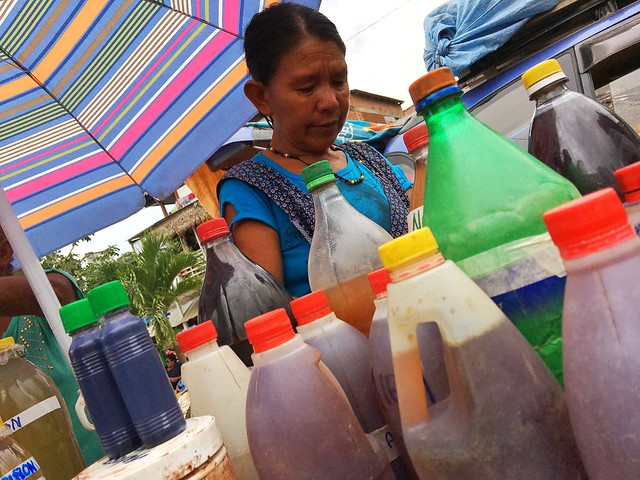 What nature does, nature can heal

Doña Juanita and Doña Antonia work with the NGO Soluciones Pràcticas. They live in other villages and meet in Capaina to share their knowledge of traditional medicine.

The NGO is funded by the European Department for Humanitarian Aid, and it gives their traditional methods a modern twist.

“This (medicine) has been practised for centuries. What we want is to give it legal and scientific backing,” says Victor Yapu, a representative of Soluciones Prácticas. “We finalised a study, an inventory of medicinal plants. We found over a hundred, but there are many more in the area that have yet to be identified. So we’ll continue to expand it”.

Bolivian law already recognises the role of traditional healers. Now, with this inventory, the NGO is working to protect and disseminate their knowledge.

As part of the project, meetings and exchanges between Doña Juanita, Doña Antonia and Capaina’s local healer Doña Dilma will become routine. The elderly ladies exchange leaves and roots that they’ll each plant in their own gardens. They also share recipes and treatments – some of them tastier than others.

Indigenous communities are particularly vulnerable to urbanisation and climate change.

Since 1900, Bolivia has suffered some 40 disasters linked to floods. Extreme events are becoming more frequent – and violent. Floods have so far claimed the lives of 140,000 people and affected 3 million.

In 2014, Bolivia experienced the worst floods in 60 years. Entire villages were damaged around here causing landslides and victims. The community of Capaina was isolated for days.

From the jungle to the people

Supporting traditional medicine is part of a wider project funded by the EU to help Bolivian ethnic groups be more resilient. It’s estimated there are 36 of these groups, accounting for nearly three million people.

“Some indigenous communities are native to these regions, but others come from the highlands and other areas of the country. So it’s important that newcomers can also benefit from this knowledge,” says Pablo Torrealba, the European Commission’s humanitarian expert in charge of South America.

“With deforestation, medicinal plants are found farther and farther away. So the project promotes the practice of collecting plants and seeds from the forest to plant them closer to communities – so that in case of an emergency, you don’t need to go deep into the jungle to find them.”

One of the goals of the project is to share the knowledge of the healers with younger generations and take it outside the jungle. For example, to Rurrenabaque market – about 20 minutes by boat from Capaina.

Doña Juanita and Doña Antonia make the trip together to bring their remedies to the weekly market. Doña Antonia has had a stall here for about ten years. “I sell a bit of everything. I bring what people ask me for,” she says.

The World Health Organisation says traditional medicine is an important and often underestimated part of health services for which demand is growing – and ensuring its quality can help expand access to care.