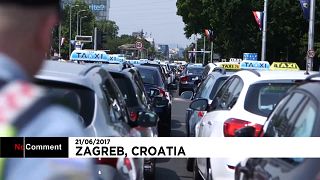 Hundreds of taxi drivers on Wednesday blocked one of the Croatian capital’s main boulevards with their cars to protest against the taxi-requesting app Uber.

They were demanding that the US-based ride-hailing service be banned in the country, citing what they see as illegal operations in Croatia for the last two years.

Their demands were debated in Croatian government on Wednesday in Zagreb and Prime Minister Andrej Plenkovic said: “We have concluded that transportation via Uber is against the current regulations in the Republic of Croatia.”

Uber issued a statement saying that the blocking of Zagreb streets “poses a threat to the citizens and infrastructure”.