Abbas is 10 years old. He goes to school every day from 1.30 pm to 6.00 pm. Education for him has been a battle. He is Afghan, and arrived at the Malakasa refugee camp in north-eastern Greece with his family a year and a half ago. He is one of 2,500 children living in camps who have started formal education in Greek schools.

Every kid has the right to go to school. Education is not a privilege, it's a basic human right. 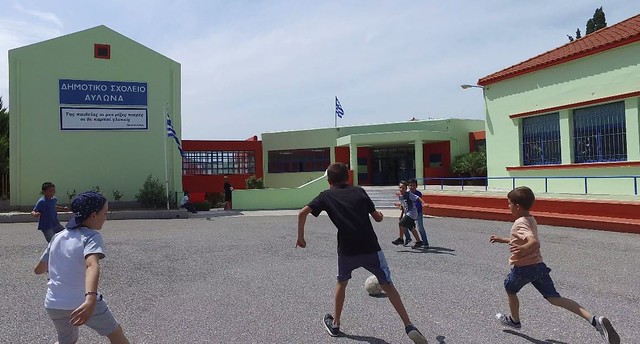 “I’ve been going to school for three months. It’s really important to study, it’s important for my future,” he tells us.

Abbas and the other young refugees have been accepted in 93 schools across mainland Greece thanks to a transport scheme funded by EU Humanitarian Aid and implemented by the UN’s International Organization for Migration (IOM). The project started in October and now covers 32 camps.

“Before the launch of the programme, kids did not participate in any kind of formal education,” says IOM project coordinator, Iannis Baveas. “Before that, it was only non-formal education inside the camps. It’s very important because every kid has the right to go to school, and education is not a privilege, it’s a basic human right.”

The kids are taken by bus to selected schools located between two and 18 kilometers away. It takes Abbas about a quarter of an hour to reach Avlona elementary school, which has taken in 20 refugees from Malakasa camp in addition to its 235 pupils.

“Many of those children have never been to school in their home countries, which means they didn’t even know the basics about how to behave inside a classroom,” explains teacher Giannis Stefanidis.

“In the past two and a half months they have learnt roughly 300 words. I think that’s good. But the best thing is that they have big smiles on their faces,” he says.

The young refugees study Greek, English, maths, IT, arts and gymnastics. They have been going to this school since the end of March and are integrating well.

80% of the child refugees living in camps attend school through this project. Those who have moved to accommodation in towns are expected to attend morning classes at ordinary public schools, but real figures are hard to obtain considering how mobile the refugee population is. This is also one of the main challenges when trying to get children into school.

“For many of the families it has been a struggle to explain to them how important it is for children to go to school, even if there are plans to move to another country,” says Yorgos Kapranis of EU Humanitarian Aid. When asked what the aim of the European Commission is for the future, he answers: “This programme is temporary, because these sites are not meant to stay forever, they are transit (sites), families are already moving out of the camps, the EU is paying for apartments and the children then go to the morning classes. So this programme is preparing them to better integrate the national system.”

Abbas’ father, Mohammed, dreams of being relocated to Switzerland. But he is proud his children go to school. In the previous two decades living in Iran, one of the main concerns was access to education.

“I hope he can go on studying in school because he likes it. I’m optimistic and have high hopes for his future. One of the reasons we emigrated was to give our children an education,” he tells us.

Greece’s education ministry told us all child refugees including those living in camps will be welcome in the same classes as Greek children from September.