North Korea displayed what appeared to be new long-range and submarine-based missiles at an anniversary parade in Pyongyang on Saturday, in another characteristic show of strength.

Along with goose-stepping soldiers and marching bands, some weapons analysts have said they believe new types of intercontinental ballistic missiles (ICBM) were among those on display – while acknowledging that the designs may be in their early stages. 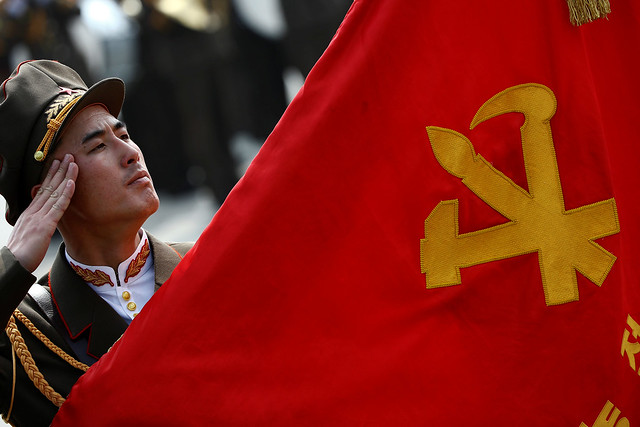 Pukguksong submarine-launched ballistic missiles (SBLM) were also on parade – the first time North Korea has shown off the weapons which are said to have a range of more than 1,000 kilometres and are hard to detect.

“It suggests a commitment to this programme,” said Joshua Pollack, editor of the Washington-based Nonproliferation Review. “Multiple SBLMs seems like a declaration of intent to advance the programme.”

Some missiles may have been new, but the bellicose threats to the US which has vowed to act over Pyongyang’s weapons tests were familiar.

As leader Kim Jong Un presided over events celebrating the so-called “Day of the Sun” honouring his grandfather’s birth, a close aide addressed the packed square.

“If the United States wages reckless provocation against us, our revolutionary power will instantly counter with an annihilating strike, and we will respond to full-out war with full-out war and to nuclear war with our style of nuclear strike warfare,” Choe Ryong Hae said.

China, whose foreign minister met his French counterpart in Beijing on Friday, has said it wants to cooperate with Russia to calm tension over North Korea as quickly as possible and bring all parties to the negotiating table.

It has already stepped up economic pressure on Pyongyang this year.

The US attack on a Syrian airfield has raised questions over its plans for North Korea. Washington has warned that a policy of “strategic patience” with Pyongyang is over.

“The time for action is now and by that we need to look at ways to put increased pressure on North Korea in order for it to recognize the reality that it needs to pursue de-nuclearisation”, State Department spokesman Mark Toner said on Thursday.

Washington has sent a nuclear-powered aircraft carrier group towards the region. US Vice-President Mike Pence travels to South Korea on Sunday as part of a long-planned Asian tour.

American intelligence officials have reportedly said the US is ready to launch a preemptive strike with conventional weapons against North Korea if it is sure Pyongyang is about to stage another nuclear weapons test.

Following the huge bomb dropped by the US in Afghanistan, China’s Global Times – the Communist Party’s official newspaper – said North Korea must have felt the shockwaves.

“It would be nice if the bomb could frighten Pyongyang, but its actual impact may just be the opposite,” it said in an editorial.

Opinion: Turnaround before too late on nuclear issue in #KoreanPeninsulahttps://t.co/TgtFZ35gcrpic.twitter.com/01cPgD2OBO

What North Korea is trying to accomplish with its provocations https://t.co/zy934lzLNrpic.twitter.com/XTs9qsnhpg