Democratic presidential candidate Hillary Clinton has made her first statement since her crushing defeat in the US election.

“I congratulated Donald Trump and offered to work with him on behalf of the country,” she told supporters in New York.

“I hope that he will be a successful president for all Americans.

“We have seen that our country is more deeply divided than we thought but I still believe in Americans and I always will.

“And if you do, then we must accept this result and then look to the future.

“Donald Trump is going to be our president. We owe him an open mind and a chance to lead.”

Clinton also spoke about gender equality, sending out a message to those who had hoped that she would become the first female US President.

“To all the women, especially the young women who put their faith in this campaign and in me: I wan’t you to know that nothing has made me prouder than to be your champion.

“We have still not shattered that highest and hardest glass ceiling, but someday someone will and hopefully sooner than we might think right now.”

A tweet was the last thing the public heard from Hillary Clinton on election night, as the keys to the White House disappeared from reach.

This team has so much to be proud of. Whatever happens tonight, thank you for everything. pic.twitter.com/x13iWOzILL

Her devastated supporters waited for an appearance at campaign headquarters when the final results came through, but instead it was her campaign chairman who fronted up.

John Podesta told the crowd: “Everybody should head home, you should get some sleep, we’ll have more to say tomorrow.

The mood among Clinton supporters at New York's Javits Center on election night was far from joyous. https://t.co/iOAInOdRqk#Election2016pic.twitter.com/ehDk39Mr0P

It had been reported that Clinton had earlier prepared a victory speech but also a speech in case of defeat.

But there are conflicting reports about why Clinton did not make an election-night address, as many had expected.

Democrats and anti-Trump protesters took to the streets in many centres to protest against the Republican’s victory.

Clinton supporters across the US gather to protest Trump’s victory https://t.co/eUZxlFiqTKpic.twitter.com/ossKxoLfGt 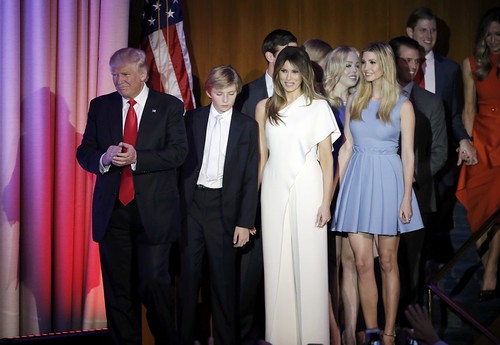