What is the Hajj?

Islam’s Hajj pilgrimage is one of the faith’s so-called five pillars and is a duty for all Muslims once in their lives if they are capable of it.

Each year, about two million Muslims from all over the world flock to Mecca in Saudi Arabia, Islam’s holiest city. Some save for a lifetime to be able to afford the journey.

Hajj begins during the 12th and final month of the Islamic lunar calendar, meaning that it can fall at different times in different years.

This once-in-a-lifetime obligation is an intense spiritual experience for any Muslim.

The Hajj culminates in the three-day Muslim festival of Eid al-Adha. 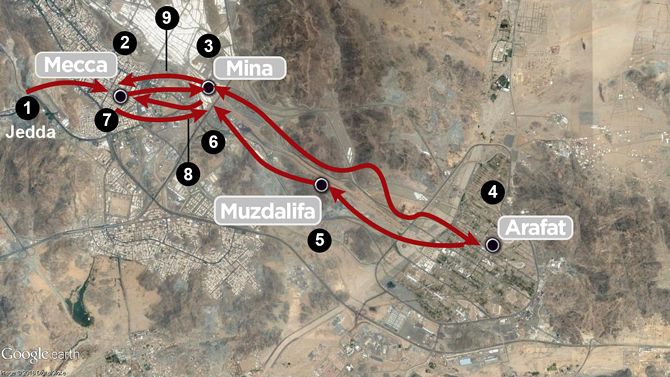 What are the rituals of the Hajj?

On each of the five days, pilgrims perform designated rituals with spiritual significance.

To carry them out, each participant must be in a state of Ihram, meaning ritual purity.

All rituals are important. Two of the best-known are:

Saudi Arabia, where Islam first emerged around 1,400 years ago, has made efforts to ease congestion at stoning areas and improve safety generally.

Timeline of the tragedies of Hajj

The Haj has been marred by many disasters, including stampedes and tent fires, despite authorities investing heavily in better infrastructure.

In 2015, a crush of pilgrims travelling from the camp at Mina to the Jamarat bridge left hundreds dead.

Saudi authorities said 769 people were killed in the disaster, the highest Hajj death toll since a crush in 1990.

Counts of fatalities by countries who repatriated bodies showed that more than 2,000 people may have died, more than 400 of them Iranians.

Other tragedies over the decades at Hajj include: