Skaramangas is one of the 35 Greek refugee camps. Nearly 3,000 migrants have found shelter in this unusual site, which is the location of an Hellenic Naval base. The number of migrants arriving here might reach 7,000 within the next few months. This is because of relocation from temporary camps, like Piraeus, where many of these families had previously stayed. Here, the Greek Navy provides migrants with food and water three times a day. The Hellenic Red Cross has a medical centre and delivers dry food and hygiene kits every ten days.

“Because they are going to stay here for a long time, we need to implement activities for them, possibly lessons for the children, groups for women to have the opportunity to discuss their needs,” explains coordinator Matina Nakopoulou. “All these things will be done from now on.”

The camp opened at the beginning of April and is home to mainly Syrians, and some Afghans and Iraqis. Tempers can quickly flare due to the mix of nationalities and the desperation to leave Greece.

Bahija comes from Aleppo and lives in a container with her four daughters. She wants to join her 21-year-old son in Germany. Conditions are easier than in other camps, each container has water, air conditioning and a bathroom. However, she finds it difficult to imagine the future for them. 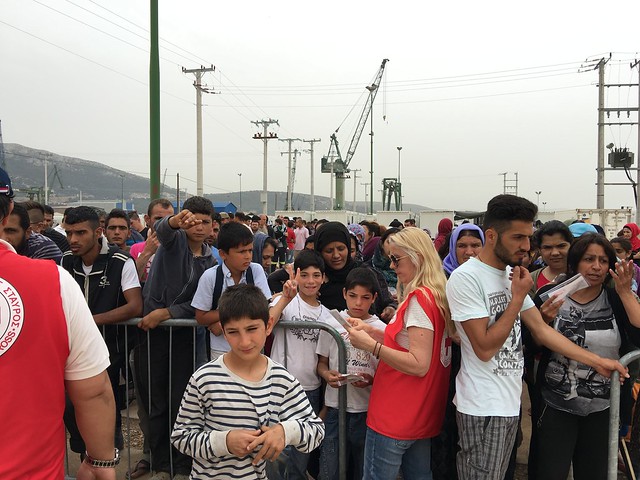 “Look where I am right now,” says Syrian refugee Bahija Qadur. “How can I think positively about my future? Syria has been destroyed and our homes too. We have no future”.

After the Balkan transit route was closed off, over 54,000 refugees were left stranded in Greece with Athens struggling to cope with registrations and asylum seekers’ requests.

Monica Pinna, euronews: “Greece’s unprecedented migrant crisis has stirred controversy. We are all aware of the fact that this is a big challenge for Europe. What are the Priorities?”

“Europe has never experienced anything like this before,” reveals EU Humanitarian Aid Evangelos Petratos. “This is why the Commissioner for Humanitarian Aid invested €700 million to help and we have actually already committed the first €83 million. Our aim is to assist these people and make sure they live with dignity while they are in Greece”.

Monica Pinna, euronews: “Around 15,000 people have been left stranded near Athens since Northern borders were closed. We decided to visit the Elliniko camp in the Greek capital to see how people were coping with the situation”.

Elliniko was the site of an international airport, and the Baseball And Hockey Stadiums for what was once the pride of Greece, the 2004 Olympic Games. These three buildings, abandoned for years, are now used as temporary refugee camps. The Danish Refugee Council gave us exceptional access to Elliniko II, the old airport, home to approximately 1,200 refugees.

“This is an official site,” explains Danish Refugee Council’s Kyriakos Giaglis. “We have seen the population going down because of the conditions of the site. There are no windows, there is no ventilation, so this is definitely not an appropriate site to live during the summer. The ministry of migration are putting a lot of effort into building appropriate sites but it’s a slow process.”

Demographics: based on arrivals since Jan 2016

Families here are waiting to reach other European destinations. There are 6 toilets for men and 6 for women inside the old terminal. The Danish Refugee Council, which is financed by the EU, provides food, hygienic materials and second-hand clothes while providing protection assessment .

These assessments are the basis for referrals to other agencies that will help refugees in their demands. Many migrants wait, others don’t. This Afghan designer is going back to Kabul with his family just three months after arriving in Greece. He paid the smugglers 14,000 dollars for his European dream.

“We saw how life is in Europe but that’s all behind us now as we’re leaving,” says Afghan migrant Suheil Sahizada. “Here human rights didn’t apply to us. We’ve been here for three months and nothing has changed since our arrival. Migrants need to know the truth before deciding to venture further into Europe”.