This nuclear power plant can not resist floods nor earthquakes. And most importantly, they've recently discovered weak points inside the reactor pressure vessel. It's old and should be shut down forever.

In 2002, he led a group of Greenpeace activists which managed to plant harmless booby traps around the perimeter of the world’s oldest atomic energy site at Beznau in Switzerland. Because of Leo, the operating firm reinforced its security measures.

Today, visiting his friend Heini Glauser, Leo shares another fear: floods. The plant is build on a river island. The Swiss Nuclear Safety Inspectorate says that’s no problem. But the pair aren’t buying it.

“This report is full of false assertions, they are simply wrong,” says Heini.

“The Beznau nuclear power plant can be totally flooded at any moment !?,” asks Leo

“Yes. And we are not just talking about one or two meters. The flood will be many meters high. It could be the same as Fukushima,” says Heini.

“It’s a con. They are cheating by using completely wrong calculations,” concludes Leo.

“Have a look at the river Aare, it’s wild when it floods. Authorities say: floods could go up to 37 centimeters… it’s absurd. Already after some rain the water level is above a metre…. They say also that the flood velocity could reach six meters per second… but independent experts have told me that they could go up to ten meters per second,” said Heini.

The small-town of Brugg lies ten kilometers from Beznau. Heini and Leo show us the historic flood marks. Heini’s own research contributed to a comprehensive study carried out by the government. As an architect, he knows how to calculate volumes and is a keen student of history.

“What does this mean for the Beznau nuclear power plant?” asks Leo.

Leo is infamous at the power plant but nonetheless security is very tight so our reporter Hans von der Brelie invites them for a picnic to talk about their concerns.

“This nuclear power plant can not resist floods nor earthquakes. And most importantly, they’ve recently discovered weak points inside the reactor pressure vessel. It’s old and should be shut down forever,” said Leo.

Last year, almost a thousand defects were found deep inside the very heart of the reactor. Since then, the plant has been offline for further inspections.

“Well, yes, that’s the main problem of this nuclear plant. It’s been running for 47-years now. Wherever you go in the world, no nuclear plant of this type has ever run for such a long period. It’s an experiment and we’re the guinea pigs: they want to run the plant until it breaks,” said Leo.

But that’s wrong according to the operator. It says the so-called embrittling process is closely watched by (experts) nuclear physicists and mathematicians specialized in material fatigue and probability calculations.

The nuclear power plant is surrounded by peaceful looking Swiss villages – such as Kirchdorf. Trees still carry the colourful remains of last year’s summer fete. We phone around a bit to get a lead on when the plant could be restarted.

The spin-doctors in charge of Axpo’s communication were very firm from the start: “we do not talk on camera.”
So, we tried again. And again. After a few weeks of to-ing and fro-ing, the “no” turns into a non-enthusiastic “well, let’s do it.”

“Well, of course, there are no “holes” nor “cracks”… there are just some flaws… we found them in the reactor pressure vessel,” explained Axpo spokesman Antonio Sommavilla. “There is some kind of embrittling effect, but based on first findings we think that, in general, there are no safety-related reasons to prevent us from relaunching the plant and to operate it further.”

But local residents don’t agree and make their feelings clear with alp horns in front of the Swiss Federal Nuclear Safety Inspectorate.

The controlling authority is accused of being too closely connected with the pro-nuclear lobby. By law, this administration should be independent – and so we are Sebastian Hueber, head of communication tells euronews.

A referendum will be held in the autumn and preparations are well underway.

Switzerland’s abandoned the idea of building new nuclear power plants. And the debate over the lifespan of the remaining ones is fast heating up. 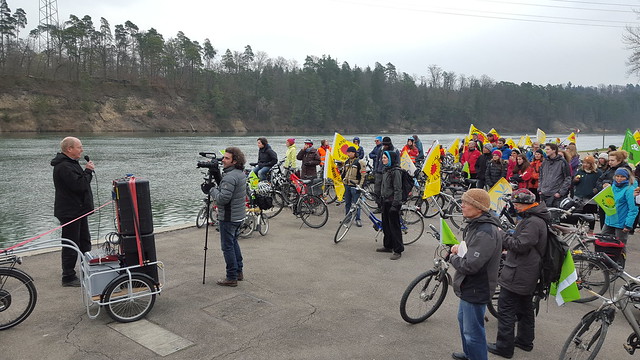 Euronews met Sebastian Hueber, Head of Communication at the Swiss Federal Nuclear Safety Inspectorate, to ask him about growing security concerns regarding the world’s oldest nuclear power plant, Beznau 1, located in Switzerland close to the German border. The full interview is in German language.

Sommavilla: ‘‘Europe should not be afraid of Beznau nuclear power plant’‘

Antonio Sommavilla is spokesperson of Axpo, the Swiss company in charge of Beznau – the world’s oldest nuclear power plant. He told euronews he admits that there is an “ongoing embrittlement process” in the reactor pressure vessel but insists that “the plant is safe”. The interview is in German language.