Burj Khalifa, the world’s highest skyscraper, dominates Dubai at a height of 828 meters. But this is to change in the coming years. The municipality of Dubai has unveiled the design of an even higher tower, the Dubai Creek Harbour.

The building, which will cost around 877 million euros to build, will be “slightly higher” than Burj Khalifa, says Mohamed Alabbar, Chairman of the Emaar real estate group that will direct and finance the project.

Alabbar says the exact height of the Dubai Creek Harbour tower will be announced at a later date, at the conclusion of the work. The building is expected to be finished before Expo 2020, for which Dubai expects to receive more than 20 million visitors.

The tower, designed by the Spanish-Swiss architects Santiago Calatrava, was picked from a shortlist of five. The final was inspired by the lily flower and evokes the image of a minaret, a distinctive symbol of Islamic culture. 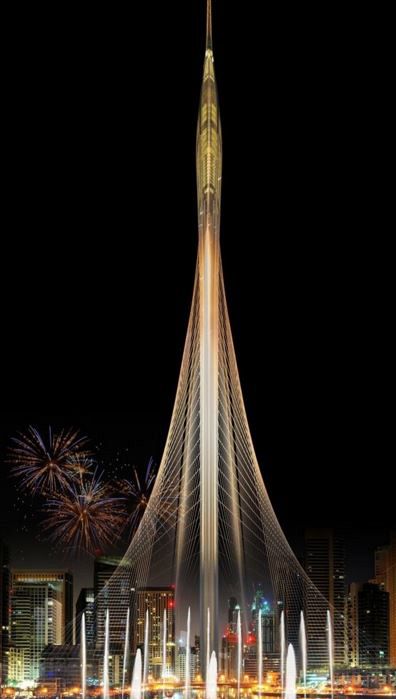 The building will be connected to the ground with sturdy cables inspired by the delicate ribs of the lily leaf. The cable matrix will give “the structure its strength, firmly anchoring it to the ground with technical precision using the materials according to the most modern engineering studies”, says Calatrava.

The design of the structure may put at risk the official recognition of the Creek Harbour tower as the “highest building in the world”. Unlike Burj Khalifa, the new Dubai facility will not integrate residences or offices into the structure.

There will be room for hotels, boutiques and it will have multiple viewing platforms and recreational activities overlooking a wholly new city.

The Emaar real estate group says the construction will be the centerpiece of the redevelopment of the Dubai Creek in the heart of the old Dubai.

Emaar claims to have sufficient resources to finance the project, most probably 50% by stocks and 50% in loans.

As it stands, the Burj Khalifa will be “overtaken”, in 2020, by the Kingdom Tower in Jeddah, Saudi Arabia, which is planned to be more than one kilometer high.