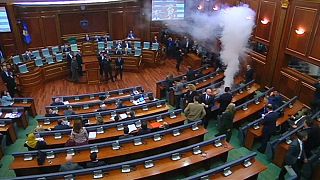 “What is happening today again in Kosovo’s parliament is a repetition of violent acts, in the highest institution of the country.”

Those were the words of Albanian lawmaker Bardhyl Meta after tear gas was again let off in Kosovo’s parliament.

It was released by Kosovo opposition parliamentarians who have been protesting for months against an EU-brokered deal with Serbia to give more power to Kosovo’s small Serb minority.

The tear gas protests and street demonstrations began in October 2015.