You saw Bernie Sanders crushing Hillary Clinton in the New Hampshire primary by whopping 22 percentage points and you think the Vermont senator would now take the lead in the race for the Democratic nomination.

There were 24 delegates to be allocated out of the New Hampshire Democratic primary, based on the vote statewide and by congressional district. Sanders, obviously, won more of those, 15 to her 9.

Add in the “superdelegates” who have already committed to a candidate, and Clinton moves up. Six of New Hampshire’s eight “superdelegates” have publicly said they will vote for Clinton at the Democratic National Convention in July. (Two are uncommitted.) So the final New Hampshire tally is: Sanders 15, Clinton 15. What?

Who are these superdelegates who play such an important role in the nominating process?

Comprised of party and elected officials, “superdelegates” have a vote at the national convention because of their position and are not elected by primaries or caucuses.

They are party insiders of all sorts — they include members of Congress and of state parliaments, as well as Democratic National Committee (DNC) members, the managers of the party.

So a little known DNC committee member might be a superdelegate, as well as former president Bill Clinton and Senator Sanders himself. And while state primary results help apportion the non-superdelegates, the superdelegates get to pick who they want.

There will be 4,763 delegates at the Democratic convention in Philadelphia in July, meaning that Sanders and Clinton will need 2,382 to win the nomination. There are 720 superdelegates, roughly one fifth of the entire convention.

More than half of these superdelegates have already committed to one candidate, mostly to Hillary Clinton: the former secretary of state and first lady has 362 of them and Sanders has 8 (eight).

Right now, after Iowa and New Hampshire and days before Nevada and South Carolina, here is the total delegate count, according to the Associated Press: Bernie Sanders has 44 delegates and Hillary Clinton 394. Yes, 394.

In other words, Clinton already has 16 percent of the votes she needs in her bag and Sanders must win 54 percent of the remaining delegates to get the nomination, while Clinton needs to win just 46 percent.

This is what makes Clinton so powerful in the Democratic race. Even while she and Sanders battle it out among rank-and-file voters, she has a massive advantage. And this is what makes Sanders’ presidential bid such a long shot. 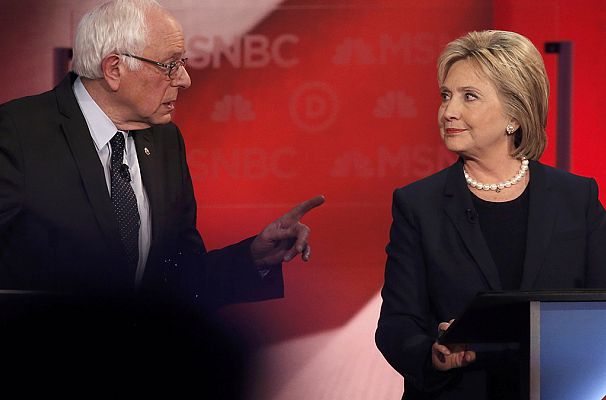 Sanders starts in a deep delegate hole out of which he might never climb.

There are many reasons for the overwhelming institutional support for Clinton. She and her husband have deep roots in the Democratic Party apparatus. They have helped and supported individual candidates for decades, thus ensuring their loyalty, and they have been formidable fundraisers for the party – even in regions that are heavily Republican like the south.

On the other hand, Sanders has spent his entire political life as an Independent. He has only lose ties to the Democratic Party whose member he became just last year in order to be able to run for president.

In addition, many Democratic officeholders, particularly those who are up for re-election in November, don’t believe that Sanders has a chance in a general election, since his self-description as a “revolutionary” democratic socialist might only appeal to the outer left of the Democratic electorate – the group that is most enthusiastic about him right now.

A consequence might be that more conservative general election voters will desert the Democrats down the ballot, hand the presidency to a Republican like Donald Trump or Ted Cruz and solidify the Republican control of Congress.

Supporters of Sanders argue that if Sanders wins the popular vote convincingly, the superdelegates will finally come on board. Otherwise it would look like the party establishment would be trying to subvert the judgment of the people.

The Republicans don’t have that same superdelegate problem. There are generally three unpledged delegates in each state, consisting of the state chairman and two members of the Republican National Committee. Convention rules obligate those RNC members to vote according to the result of primary elections held in their states.