An SOS is being sent out about the plight of thousands of refugees attempting to cross the Balkans to reach the European Union.

In a new report from Amnesty International, police in some Balkan states are accused of abusing refugees, asylum seekers and migrants.

The report says many of those caught up in the abuse are children.

#Balkans: Refugees and migrants beaten by police, left in legal limbo and failed by #EUhttp://t.co/VQI7M3PZ98pic.twitter.com/5t1qCJwWBF

“Refugees fleeing war and persecution make this journey across the Balkans in the hope of finding safety in Europe, only to find themselves victims of abuse and exploitation and at the mercy of failing asylum systems,” said Gauri van Gulik, Amnesty International’s deputy director for Europe and central Asia.

The report says Serbia and the Former Yugoslav Republic of Macedonia have become a “sink” for the overflow of refugees and migrants that “nobody in the EU seems willing to receive”.

Amnesty added in a press release: “At Macedonia’s border with Greece, and at Serbia’s border with Macedonia, refugees and migrants are routinely subjected to unlawful push-backs and ill-treatment by border police.

“Many are forced to pay bribes. One witness told Amnesty International that Serbian Border Police near the Hungarian border threatened to return his group to Serbia if they refused to pay €100 each.

“Migrants, refugees and asylum seekers reported being pushed, slapped, kicked and beaten by Serbian police near the border with Hungary and an Afghan refugee told Amnesty International that “a woman who is five months pregnant was beaten.”

The countries named in the report are yet to officially respond.

The most difficult journeys the migrants are attempting are from Syria, Afghanistan and other crisis zones to Turkey and Greece by sea, and then over land across FYR Macedonia and Serbia into Hungary.

Already this year almost 2,000 people have died attempting to cross the Mediterranean, and EU states are struggling to find an effective and coordinated response to the problem.

But Amnesty says the western Balkans route has now become the busiest passage for migrants to Europe. 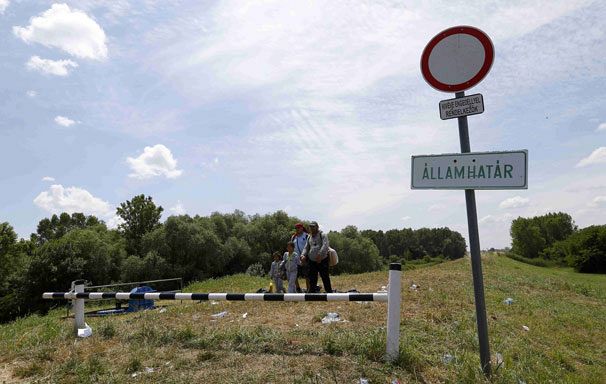 As euronews reported earlier this month, more and more people are arriving by sea to Greece because walls have been built at Greece’s and Bulgaria’s land border with Turkey, a key route for Syrian refugees.

The European Policy Centre says UN figures show 90 percent of asylum seekers do not stay in Greece, instead heading north to other parts of Europe via the FYR Macedonia and Serbia to Hungary.

Budapest is not happy that it is receiving more and more migrants. The government says 72,000 have entered the country so far this year, compared with 43,000 in 2014.

On Monday the Hungarian parliament passed new legislation for tighter asylum rules, and the way was cleared for the construction of a fence at its border with Serbia.

“Europe has a clear responsibility to help those seeking protection from war + persecution” http://t.co/Wne8MkA5yMpic.twitter.com/OYPlCIGLWZ

The rights group interviewed more than 100 refugees and migrants between July 2014 and March 2015 in Serbia, Hungary, Greece and FYR Macedonia.

At FYR Macedonia’s Reception Centre for Foreigners hundreds, including pregnant women and children, are held with limited access to sanitation and health care and with no opportunity to claim asylum, Amnesty said.

“As increasing numbers of vulnerable refugees, asylum-seekers and migrants become trapped in a Balkan no-man’s land, the pressures on Serbia and Macedonia are mounting,” said Amnesty’s van Gulik.

“These stresses, like those on Italy and Greece, can only be resolved by a much broader rethink of EU migration and asylum policies.”

Failing asylum systems in the region leave many in a legal limbo and vulnerable to human rights violations, the report said.

In Serbia, only one individual was granted asylum in 2014 and only 10 were granted refugee status in FYR Macedonia.

“Discouraged by the slow progress in processing asylum applications, most asylum seekers continue their journey into Hungary, where they face further violations of their rights,” said Amnesty.

Asylum seekers are meant to be processed in the first EU country they set foot in, which, in the case of migrants in the Balkans, is often Greece.

Amnesty said in a press release: “The ever-growing number of migrants and refugees taking the Balkan route is a consequence of a broader failure of EU migration and asylum policy, over which Serbia and Macedonia have no control. 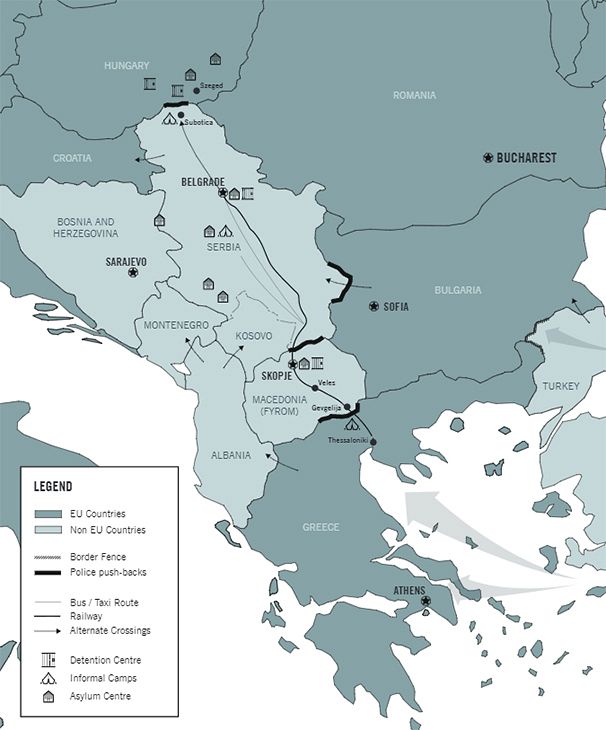 “Placing the primary responsibility for processing asylum applications on the first EU country of entry and limiting safe and legal avenues of entry has put an unsustainable strain on the EU’s outer fringes and neighbouring states.

“Rather than prioritising improvements to the asylum systems of countries along the Balkan route, the EU has instead invested heavily in its efforts to strengthen their ‘border management’ systems.”

Regarding the wider context of the refugee and asylum problem, the UNHCR says the number of people displaced worldwide hit 59.2 million in 2014.