Small asteroids roughly about a metre in size are hitting the earth’s atmosphere and breaking up almost every other week, according to Nasa.
The US space agency has released a map showing the frequency and approximate energy released by such events dating from 1994 through to 2013.
The map does not show the smaller impacts, less than a metre in size, but does record more than 500 events of various energies. 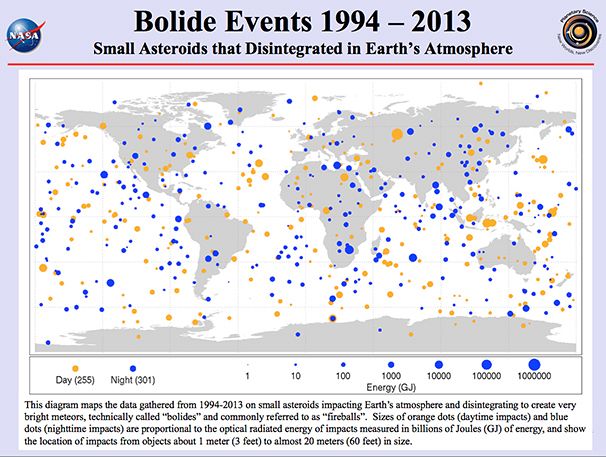 The US body says the size of the orange dots (daytime events) and blue dots (night-time events) are proportional to the optical radiated energy of the impact event measured in billions of Joules (GJ) of energy.
The largest event recorded over the 20-year period was the Chelyabinsk impact in February 2013, which hit the atmosphere with the equivalent impact of 440,000 – 500,000 tons of TNT.

According to Nasa: “This small asteroid that exploded in the atmosphere in Russia was about 20 metres in size before it hit Earth. While that impact focused public attention on the potential hazards of NEO impacts, space scientists have long known that such events are just a part of Earth’s geologic history.”

Lindley Johnson, the agency’s NEO Observations Program Executive, said: “We now know that Earth’s atmosphere does a great job of protecting us from small asteroids.”

Nasa says studies of Earth’s history indicate that about once every 5,000 years or so an object the size of a football field hits Earth and causes significant damage. Once every few million years on average an object large enough to cause a regional or global disaster collides with Earth. Impact craters on Earth, the Moon and other planetary bodies are evidence of these occurrences.