In a country that sadly has become used to gun-related mass killings, a harrowing crime without even a dead body shocks America.

It involves three twelve-year old girls in the normally peaceful Midwestern countryside. They were playing in the woods when two of them stabbed their friend with a 15-cm-blade knife – 19 times.

But what made this gruesome attempt to kill a fellow preteen even more ghastly was the explanation the girls gave to police. They acted, according to their statements, out of belief in “Slender Man”, a mysterious fictional internet character from horror story web sites.

Millions of worried US parents are now wondering whether their kids who play video games or surf on horror websites really understand that this is a fantasy world and nothing real. And if not, how can one detect a child’s extreme behavior?

Whether the parents of Morgan Geyser and Anissa Weier, both 12, had any clue about their daughters’ intent to kill a friend is not known, as the investigation has just begun. 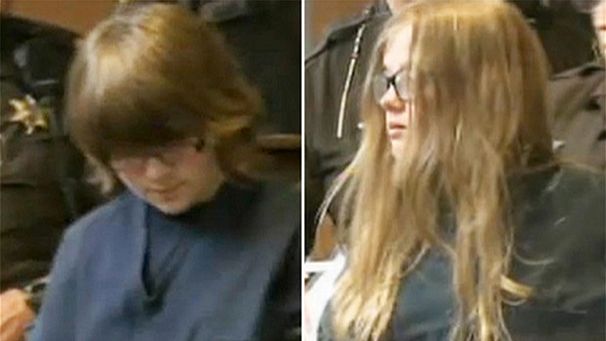 Both girls were charged with attempted first-degree intentional homicide.

Here’s what happened, according to prosecutors: The girls plotted for weeks to kill their 12-year-old friend – whose name has not been released – during a sleepover for Geyser’s birthday in Waukesha, Wisconsin, 30 kilometers west of Milwaukee.

Last Saturday morning, they lured her middle-school classmate into the woods and attacked her – one of the girls held down the victim while the other stabbed her in the arms, legs and torso. Then the assailants left.

Heavily bleeding, but alive, the victim crawled onto a pathway and was found by a passing bicyclist who called police.

The girls told investigators they wanted to please “Slender Man”, a creature they learned about on a website called Creepypasta Wiki. They believed they needed to kill someone in order to win the creature’s favor, police said.
The case prompted the local police chief to issue a warning to parents. The internet can be “full of dark and wicked things, he said at a press conference. “Unmonitored and unrestricted access to the internet by children is a growing and alarming problem.”

Depictions of “Slender Man” are different everywhere. In some stories he is three meters tall, in others he is the size of a normal man. Sometimes he has tentacles growing out of his back. He is always wearing a black suit.

As with many monstrous beings of urban legend, “Slender Man” is usually said to live in the woods, often near the suburbs.

“It is often thought as well that he enjoys stalking people who become overly paranoid about his existence, purposefully giving them glimpses of himself in order to further frighten them,” reads a description of “Slender Man” on Creepypasta Wiki, noting that “his main intentions appear to be kidnapping children.”

Created in 2009 as part of a Photoshop contest, “Slender Man” has since become a popular staple in the gothic corners of the internet.

From there, the Creepypasta site, comes a defensive reaction to the Wisconsin stabbings:

“This is an isolated incident, and does not represent or attribute the Creepypasta community as a whole. This wiki does not endorse or advocate for the killing, worship, and otherwise replication of rituals of fictional works. There is a line of between fiction and reality, and it is up to you to realize where the line is. We are a literature site, not a crazy satanic cult.”