Political tension has once again gripped Tunisia with hundreds of protesters taking to the streets of Tunis on Wednesday (April 16) to condemn what they consider very lenient sentences received by top officials of the former Ben Ali regime earlier this week.

Families of those killed and wounded during the 2011 uprising, along with sympathisers, chanted “down with the military rule” and “the interior ministry is a terrorist ministry” while holding up photos of those who died during the protests, the first of the ‘Arab Spring’. Disabled victims of the 2011 clashes also rolled down the streets in their wheelchairs in an act of protest.

The demonstration fell on the same day 18 Tunisian MPs decided to “freeze” their membership of the National Constituent Assembly (NCA) until a draft law on the creation of judicial commissions in charge of “cases of martyrs and wounded of the revolution” is approved. In doing so, they also expressed their disapproval of the military verdict.

In January 2011, Tunisia transcended its reputation as one of the most stable and tourist-friendly countries in the Middle East and North Africa (MENA) to become the launching pad of the wave of protests that swept through the Arab world and beyond. The fall of Zine Al-Abidin Ben Ali’s ignited hope of a future “Arab democracy.” It all started when a young street vendor, Mohamed Bouazizi, set himself on fire on December 17, 2010, when a policeman confiscated his fruit cart in the town of Sidi Bouzid. In a country run by what many denounced as a corrupt clan, self-immolation was his last resort to protest against the meagre conditions he and many Tunisians lived in.

However, two years after the uprising, headlines such as Tunisia’s Democratization Under Threat started to emerge, reflecting the turbulent political dynamics in post-uprising Tunisia. Angry street demonstrations and strikes have inevitably become an almost daily occurrence, exposing the challenges facing the new Tunisia.

Tunisia had two presidents in the period between independence in 1956 and the 2011 uprising: Habib Bourguiba and Zin Al-Abidin Ben Ali. Since the revolution, Tunisia has had three presidents and five prime ministers. 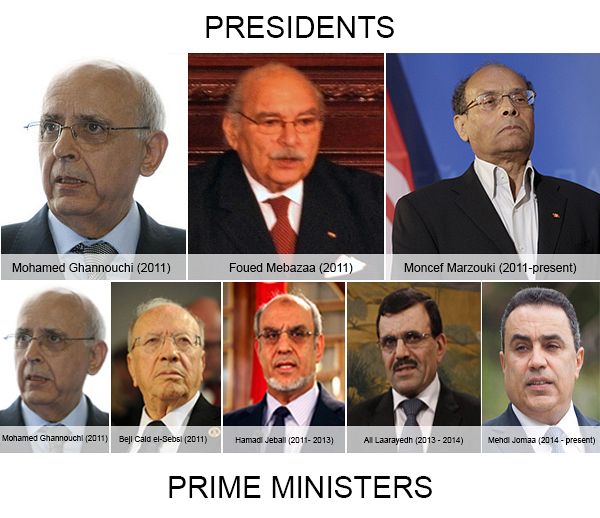 The political rivalry between Islamists and secularists over the role of religion in the country after the ousting of Ben Ali’s regime had split Tunisian society into two – broadly speaking – ideological camps frequently at odds with each other. This political rift affected the country on all levels, especially on the political front.

The country’s two main coalition parties: the ruling Islamist Al Nadha Party and the secular National Salvation Front, reached a political deadlock in mid-2013 following the assassination of two high-profile opposition leaders. Thousands of Tunisians marched down the streets in September to call for the resignation of Al Nahdha-led government.

In January 2014, the long-awaited constitution was finally approved, a consensual roadmap was planned, and a care-taker technocrat cabinet, led by Mehdi Jomaa, was placed to lead the country to fresh elections scheduled to take place at the end of 2014.

But political crises such as the recent release of Ben Ali’s two officials could prolong this transitional period further. This week, the NCA was supposed to discuss the draft of an electoral law which is scheduled to pass by the end of the month. The electoral law is expected to set election dates, set out rules for campaign finance, determine the timing and order of presidential and parliamentary elections, and decide the terms of candidacy, according to Tunisia Live. Refraining from participating in the NCA sessions could delay the issuing of the law, which is considered the final transitional stage toward achieving a long-awaited democracy.

Abid explained that if lawmakers do not hurry to agree on an electoral law and do not facilitate the job for the New Independent High Authority for Elections, delaying elections until 2015 is “very probable”.

Onlookers of the Tunisian state of affairs, including Tunisians themselves, were taken aback by the success of an Islamist movement in 2011 – after all, Tunisia had always been seen as the Arab world’s most “modern,” “secular,” and “Westernized” nation. Religious symbols, such as long beards, thobs (body-length tunics worn by men), and niqabs (full-face covers worn by women), were seldom publicly seen during Ben Ali’s rule, which prompted many Tunisians, especially the secular elite, to dismiss this form of religiosity as foreign to Tunisia and as indeed a post-uprising phenomenon.

What’s more, the emergence of radical Islamism, or what is referred to as Salafism, in the Tunisian political theatre and public life further disturbed to Tunisia’s democratic transition. The ouster of Ben Ali in 2011, the return of Al Nahdha Party to the fore, the release of thousands of Salafists from prisons, and the unstable national security apparatus permitted the Salafist movement to gain a presence in the public sphere for the first time. The power vacuum of post-uprising Tunisia also gave hope to many Salafist groups of a potential success in establishing an Islamic caliphate and making shariah law the new constitution.

However, Al Nahdha’s moderate discourse and assimilation into aspects of secularism prompted some Salafists to take on an armed struggle against the state, while disregarding Al Nahdha as a secular movement that does not rely on Islam at its core. Hence, what the government considers “terrorism” was introduced to Tunisia – although a closer look at Tunisian history suggests the presence of violent movements in the 1980s.

“Jomaa’s government has a desire to fight terrorism, contrary to the Troika government, which did not seriously consider battling terrorism until the situation became unbearable” - p.a Khaled Abid

The attack on the American embassy in Tunisia and the looting of the American Cooperative School of Tunis in September 2012, of which the United States accused Ansar Al-Shariah, an extremist group, alarmed the Tunisian authorities of the reality of the danger.

Terrorism in Tunisia sprang into the spotlight and became the bargaining chip in the Tunisian political process following the murder of two left-wingers, Chokri Belaid and Mohamed Brahmi in 2013, reportedly by Islamist militants.

But Tunisians were further shocked when five soldiers were found with their throats slit on Mount Chaambi near the Tunisia-Algerian border in July 2013. The soldiers were reportedly killed in an exchange of fire with gunmen hiding on the mountain. It is important to note that, since the revolution, the Tunisian military has become a symbol of pride for Tunisians, as it had stood as a shield between protesters and security forces three years ago. Seeing photos and videos of young men, deployed to protect the country, with their throats slit shook the entire nation.

Such an incident alarmed the government to the intensity of the issue and led to the categorisation of Ansar Al-Shariah and supporting Salafist groups as terrorist organisations.

“All the signs currently indicate that these elections will not take place at the end of 2014. With that, we are going to violate the constitution” – p.a Khaled Abid

Despite the counter-terrorism tactics and forces deployed by the government, weapons are still being smuggled through the Tunisian-Libyan border and terrorist cells are still being discovered across the country.

Abid explained that the absence of a clear strategy, aided by the constant political unrest and the coming-and-going of interim governments, has allowed terrorism to flourish in the course of three years.

But the latest care-taker cabinet is making considerable efforts, he said. “Jomaa’s government has a desire to fight terrorism, contrary to the Troika government, which did not seriously consider battling terrorism until the situation became unbearable.”

The political unrest and the national security crisis rocked to the core a Tunisian economy already poor in resources, and continues to do so.

A government spokesperson, Nidhal Ouerfelli, warned on April 11, 2014, that Tunisia’s economic situation will continue to worsen between now and 2015.

“After July, things will remain tough. In 2015, it will be tougher because we have borrowed money to pay salaries, consumption, and subsidies,” said Ouerfelli in a news conference aired by radio station Mosaique FM. “We have never borrowed money for investment.”

Unemployment remains well-above the pre-revolution level of 13 percent; the World Bank reported a 15.3 percent unemployment rate at the end of 2013.

As agricultural production and the already-limited oil and gas production have declined, growth has continued to slow down to 2.6 percent.

The uncertainties of the future

The economic conditions, coupled with corruption and a poor record of human rights, are what sparked the Tunisian revolution. But with the consistent danger of armed terrorism and the melodramatic political theatre, Tunisians remain unhappy with the outcome of the “Jasmine Revolution.” Some even outspokenly admit that things were better under Ben Ali.

“Finding a solution for the economic crisis that the country is living will reflect positively on the political climate and even the security situation and vice versa,” explained Abid. “These three challenges are interlocked. In other words, these three challenges should be given equal attention.”

But a transition toward democracy and the establishment of an up-and-running economy will not materialize until the polarisation between Islamists and secularists is put to an end and a consensus over politics is reached.

“Our political parties are more obsessed about winning the elections than taking Tunisia to the safe haven. It is their right to think about elections, but it is also their duty to make sure Tunisia reaches that point with the minimum damage on all levels. And is what we don’t see with some parties,” said Abid, adding however that he does see a chance for progress: “We remain optimistic in spite of this dark reality. We still have hope in a collective awakening.”