Why has the death of Paco de Lucia left numerous guitarists and flamenco amateurs feeling like orphans today? Why has the passing of the Spanish flamenco player been such a shock to so many people?

Certainly, his death was sudden and he was relatively young. Renowned and famous all over the world, he received numerous awards in his career. But he is above all well-known for the real music revolution that he has provoked.
His first contribution to the flamenco world was recognition of the guitar. His masters Nino Ricardo and Sabicas paved the way but Paco and his father Antonio largely contributed to his consolidation as a guitar soloist. They also insisted on adding “with the special collaboration of Paco de Lucia” onto the discs recorded with the singer Camaron.

Paco was stubborn in his youth and passed the time closed in his bedroom, practising the guitar.

He later revolutionised the technique of flamenco guitar, putting the instrument on his right leg, instead of the left like his predecessors and classical guitar players.

In this position the guitar is positioned horizontally, away from the body and leaving more room for the hand on the guitar neck. This allowed him to play melodies and chords previously impossible.

Paco did not disown classical guitar. Quite the contrary, he took the repertoire of Joaquin Rodrigo and Manuel de Falla and included techniques suitable for the classical guitar for enriching the flamenco.

But his biggest revolution was with the singer Jose Monge Cruz (Camaron).

But purists were quick to criticise Paco de Lucía and Camarón, saying they had broken with tradition.

Later, as a soloist, Paco did not stop pushing the genre in new directions. It saw percussion, such as the electronic bass, previously limited to other musical genres, to be included in his hit ‘Entre dos Aguas”. On a trip to Brazil he brought with him the Peruvian cajon and Brazilian percussionist Rubem Dantas, with whom he formed a legendary sextet that made several trips around the world over nearly two decades. 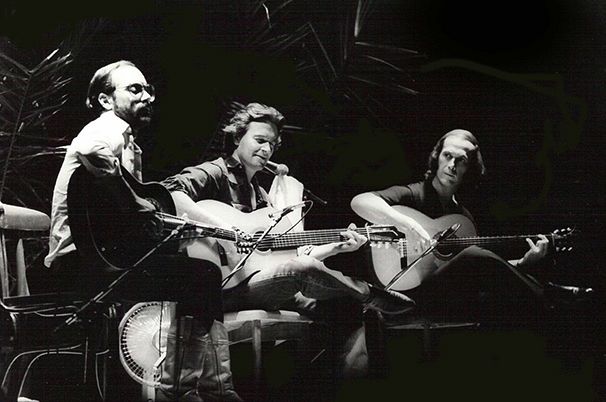 His association and interaction with guitarists Al di Meola and John McLaughlin, despite their different musical styles and techniques, was also a revolutionary act.

Tired of the weight of fame, he withdrew for a time in Mexico. But on his return to Spain in Toledo he resumed where he had left off with the album Luzia, which was dedicated to his mother and on which he sang for the first time.

He continued his many collaborations and tours and produced other artists for several years. He surprised the world again with his album Cositas Buenas, in which he revolutionised again the rhythm, melody and guitar technique. He scooped a Grammy for the album.

Cancion Andaluza would be his last album. Nearly finished, it will be released, posthumously, at the end of April. This work, dedicated to the copla, the traditional Spanish song, will, without a doubt, be one last revolution.
And it is for these reasons that today’s guitarists and flamenco enthusiasts feel orphaned.

With the contribution of Chris Harris