Brussels, Saturday January 25, 5pm: a dozen people have worn their eyes out for hours on the MEPs’ handwritten financial interests declarations, whether they are in French, Greek or Danish. Welcome to the Eurparl Hackathon for the European Elections 2014.

Imagining a hackathon concocts images of young hackers high on coffee, red-eyed after a sleepless night, trying to illegally hijack websites.
But the reality is much more prosaic. A hackathon gets developers together with, depending on the goal, complementary profiles to fulfil a project within a given time – generally 24 or 48 hours.
In this case the goal was trying to make sense of reams of data released by European institutions. It’s especially important with the European elections on the horizon.

was organised from the evening of Friday the 24th to Sunday the 26th of January. It was organized by Xavier Dutoit, a freelancer working for NGOs. As the European elections draw closer, his old dream of bringing skills together to try to make sense of thousands of pieces of data released by European institutions got even more important. It ends up as hackathon with the help of an old friend, Stefan, a Hungarian programmer, co-author of Parltrack.
It became a reality after a few months and reached a different level with the financial and logistical help of two orgnisations close to these two issues: Citizens for Europe, a platform dedicated to helping NGOs, from the European angle and the Knight-Mozilla OpenNews from the data angle.

“We hoped a dozen people would attend. Two hundred registered on the website!” The choice of those who could attend has been made depending on several criteria. Obviously, a major point was to have a balanced representation of different profiles and skills. But Xavier Dutoit was also looking for enthusiastic people whose projects ideas for the event were both interesting and feasible: “of course these week-ends are an opportunity to meet people and enlarge one’s network. But I also wanted to get shit done. I also wanted concrete things at the end of the week-end.”

All the data used during this hackathon are official and of free access mainly on the European Parliament website. Under what form is another matter that annoys many participants.

The people arriving on the Friday evening are very different. Before the Europarl Hackathon starts, politics are the major topic being discussed. Fourteen different nationalities are represented. White beards sit next to teenage-looking men. Four women, and only one programmer, are scattered among the crowd. Organiser Xavier Dutoit, keen to involve women in the project, said: “It is a lot actually for this kind of event.“ Stefan, a Hungarian programmer who helped him, is delighted too: “So much expertise is rare in a hackathon.“

Around 8pm, the hackathon starts. Participants pitch their ideas. People team up depending on their skills and tastes and then divide between the two rooms provided by the journalism school, the IHECS (Institut des Hautes Etudes des Communications Sociales), which hosts the hackathon. Then everyone gets down to work.

The sound of the keyboards

On Saturday morning, the earliest-risers arrive slowly from 9:30 am. No-one has stayed up all night. Chiara Girardelli, programmer and web designer, explains that around 1am the wifi crashed and everyone left to sleep. Everyone goes naturally back to the same seat as the day before. Coffee cups do not encroach tables. Some desk corners are covered with tangerine peelings. The mood is very studious. Lines of javascript stream. Xavier Dutoit and Stefan, whose website Parltrack is used as a source by some of the hackathon projects, are regularly called for help. 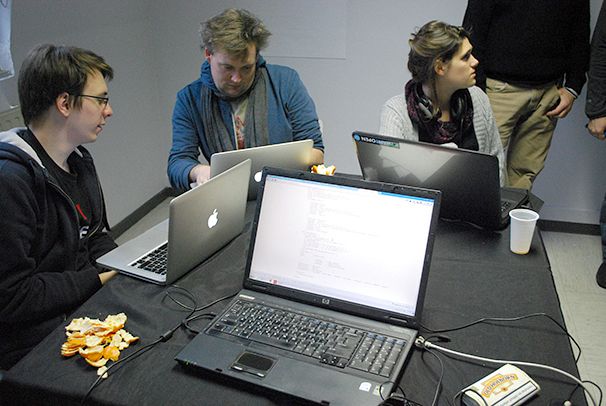 On one of the tables, a small team lead by Laurence Watson from Sandbag, works on a project that will grade MEPs on how much climate-friendly they are, depending on their votes. On another table, Chiara Girardelli does not stop coding for her joint project with Michael Thomas. They work on a data visualiation of the most-mentioned topics in the EU Parliament. Another visualization will show which country and party mostly work on a particular topic. Sven Wauters, a data analyst in the insurance field, keenly helps. He explains that he came to the event “as a tourist“ and is not motivated by a special passion for politics.
On the other side of the room, Thomas Bouchet, from the French organization La Quadrature du Net, with a volunteer’s help, improves the organisation’s Memopol tool, designed to track MEPs’ voting habits. Joel Purra, on the table opposite, frowns over his screen, incredulous of the numbers he has found concerning MEPs’ erroneous votes.
In the other room, under a roof-window, Friedrich Lindenberg moves forward with his project of a EU lobby and experts search engine. In front of him, the biggest team of 12 people continue typing the declarations of interests into their shared document. Some of them have started working on processing the data and, Thomas Tursics, a data-lover from Berlin, builds the first infographics from certain elements.

« Of course these week-ends are an opportunity to meet people and enlarge one’s network. But I also wanted to get shit done. »

Around 7pm, meat and salad are delivered in big white cardboard boxes. Alongside stands a brown cardboard box, one like those used to move house. It starts to soften, soaked with the grease from French fries. Participants grab them. One attendee is astonished : “I’ve never seen French fries served this way !“. “This is your first hackathon isn’t it? This is why!“ answers Stefan amused.

All participants share one concern. It shows on the stickers that cover the laptops and which can be heard in every conversation: open data. Open data is data accessible to the public, in a reusable digital format under an open license. For these free-software lovers, this is second nature to them. Many of them believe this is a fundamental element of political transparency and therefore of democracy. All the NGOs present – Democracy International, Transparency International, La Quadrature du Net or Access Info – state that accessing public data and especially European institutions data is a matter of information freedom. 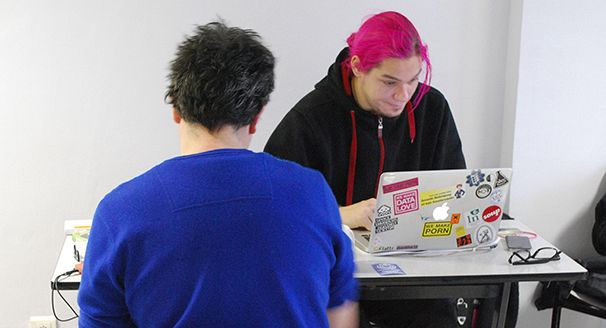 Daniel Lentfer, campaigner for Democracy International, joined the team that has endeavored to “free” the financial declarations of interests: “I can’t believe that they are still using PDF!“. PDF format does not allow users to get the data easily nor to process them to extract infographics for instance. The only solutions: copy everything manually in a document, as a team did during this hackathon, or “scrap the data” when possible. “Scrapping data” means using a program to get the content of a website and its database, to reuse them. If several attendees admit that governments are doing better on open data, Daniel Lentfer explains that “there is room for improvement“ because “much of the data still needs to be scrapped“ before being usable.

Juan Elusoa, from Spain, sums up this shared idea: “data should belong to everybody“. He considers that it would also help create jobs. Thomas Tursics, a German developer who sits across from him, answers back that programmers could create applications from this data made public. He quotes the example of an application which would show free parking spaces. The economic model is already there, they claim, only the data is missing.

“Data should belong to everybody”

Another condition for using data well is to make sure it is shared with a standard format and under open licenses. Parltrack, for instance, is distributed only under open license: its code, its data and the content of the site.

Thomas Tursics explains that “projects from this hackathon could seem small but they could be combined“. And this, Juan adds, would “show the power of the data“ to institutions and hold them to account.

But for the both of them, media are an essential in-between to explore, share, explain and tell what can be found in data. Citizens who are not into activism or open data rarely know about tools such as Parltrack or LobbyPlag. Xavier Dutoit also explains that open data can work as a citizen tool only with a complete chain: “for activists like Stefan, getting the data free is an aim in itself. It is a thorough job that a journalist or a citizen cannot do. Then the others start from this. Each skill is a chain link“. 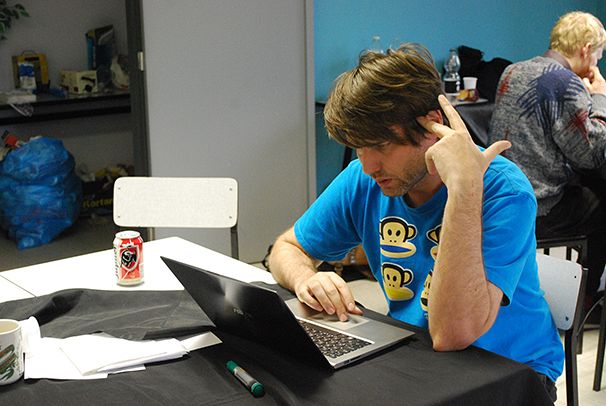 Two of the week-end projects were directly inspired by these questions. One of them involved grouping all the available databases so that anyone can extract what he/she needs. Another project was an open letter asking the EU that data gets opened and published in a standard digital format. It should then become an online petition.

On Sunday, things speed up behind the screens’ blue light. At 5pm, all the participants gather in one of the classrooms, joined by a few visitors. One after the other, teams of one to twelve members, present their results. People applaud heartedly at each project. They are many discoveries or leads for further research. The best find is probably Danish MEP Jens Rohd’s declaration of interests. He wrote “master of the universe“ as his previous profession to mark his opposition to the new code of conduct that imposes the declaration of interests.

The European parliament allows the use of most of its data “provided that the entire item is reproduced and the source is acknowledged”. Many documents are also accessible to any citizen who asks for it. This person only gets this information directly though.
Following rule 103, the European parliament must be transparent and publish most of its information (votes, committee reports…).
In the wake of a payoff scandal, the parliament voted a new code of conduct on the 31st of August 2011. It requires that every MEP fill in a declaration of financial interests. They face sanctions and action limitations if they do not publish it, nothing forbids them from leaving it empty and no control is made.