Whether it’s three people on a Friday evening or ten on a Sunday afternoon, the ritual is the same at the Narcotics Anonymous (NA): coming together as addicts, sharing one’s difficulties, victories, doubts and hopes. And another day of not using. Euronews’ Marie Jamet reports from Lyon, France.

Part of our special dossier of Drugs in Europe

On the first Sunday of October the reformed and reforming addicts arrive one by one. They joke and make small talk, catching up on what everyone there has been up to since previous meetings months, weeks or even just a few days ago. There are five men and five women of varying ages who are all here through their own choice; just as with its cousin, Alcoholics Anonymous, the “fraternity” does not impose any obligation to its members. They help themselves to tea, coffee or a glass of water, and take their seats at a large square table covered with Narcotics Anonymous documents, books and badges. In the centre of the table stands an unlit candle. The atmosphere is warm.

The meeting gets under way when one of the members lights the candle and the moderator takes a plain A4 sheet of paper to lead the meeting. Meetings always follow the same rigid procedure, whether there are three people attending or ten. It starts with the reading of Narcotics Anonymous’ texts: ‘Why Are We Here’, ‘How It Works’ etc. One member reads out upcoming events such as regional or national conventions. Then the moderator reads the topic of the day. This Sunday it is about making amends. 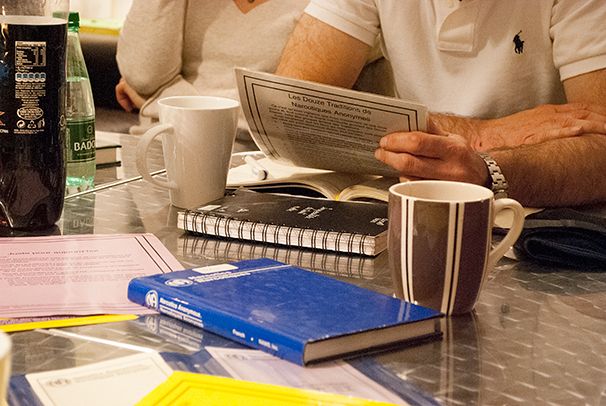 Reading NA literature at the beginning of the meeting (Sunday October 6, Lyon, France)

Participants are then invited to share their thoughts on the day’s theme or anything else they feel worthy of mention. When one person speaks, the others all listen; this is neither a debate nor an exchange. Taking a stand, stirring controversy and provocative or offensive statements are forbidden. Each member starts his or her speech with a brief introduction: “Hello, [name], addict”. The others answer back: “Hello [name]”.

This Sunday’s testimonies are intimate, optimistic yet solemn. The members’ everyday lives are welcomed to the table: work, children, partners, family, friends, life accidents linked to “dependence illness”, hopes, weaknesses, introspection, memories… As each tells their story, the others punctuate a sentence with a laugh or a nod. Some stare into space; others fix their gaze on the speaker who, when finished, is thanked by the group. Goodwill, a central pillar of Narcotics Anonymous, is key for the members.
After a short silence, the next speech starts: “Hello, [name], addict”. One person’s words may resonate with someone else, who may decide to elaborate, while another may simply choose to stick to the day’s theme.

The structure of recovery

These daily themes are interlaced with the twelve steps towards recovery. The people around the table that afternoon are at varying stages of recovery. The day’s theme means different things to different members but sharing individual experiences is an important part of recovery. “For a new member, he can see people for whom the program is working. For someone who no longer uses, it feels good to share what we have been through and are still going through. But also to see where we do not want to go back to.” It is a matter of “living in the present. The past might be too painful and the future might be too difficult to imagine. Being abstinent for the next 24 hours is enough, just for today.”

Addicts who join Narcotics Anonymous are supervised and supported by a structure of traditions and principles that guide the group’s organisation, the meetings and the recovery path. They are partly repeated at every meeting. The third tradition states, for example, that to become a member, one just needs to have “a desire to stop using”.

Another of these Twelve Traditions states that “every NA group ought to be fully self-supporting and decline outside contributions”. Hence the hat in the centre of the table: at the end of the meeting, it is passed around so that each participant can put money towards supporting the group which can mean money to hire a meeting room, buying drinks or transport to go to conventions. 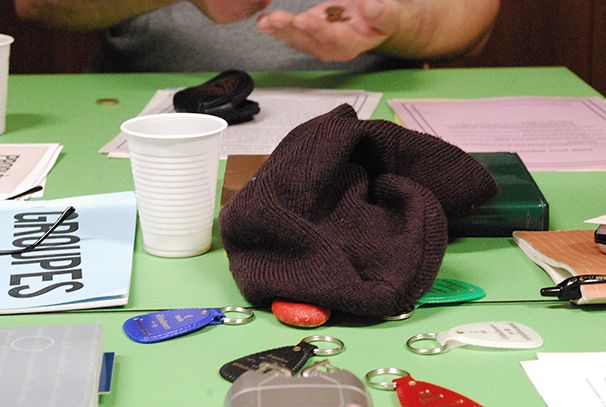 The hat at the end of the meeting (Friday September 27, Lyon, France)

Another principle says “we have made a searching and fearless moral inventory of ourselves”. This introspection is a striking element of these meetings: the extent to which these people work on themselves, how they look frankly at what they do and who they are. While Narcotics Anonymous recognises dependence as a chronic illness, meetings are not medical therapy. There is no doctor to guide the meeting. But the members think, analyse what they have done or not done, who they are or would like to be. It is a way of shunning denial and to stop “playing the victim”, explain several addicts.
This is also how “identification and mutual help” can work: “we know what we are talking about. We have all been through what the others can tell. There is no judgement passed.” Anonymity is also here to free people from social or any other stereotypes.

Some relapse, go for rehab, come back, start a therapy. Several people we have met confess coming back to NA “because nothing else worked” for them. The path to recovery is not linear but, as one participant explains, “To me, NA is a place where I can recover. Even when I am feeling bad, I know there is a place where I can come and recover.”

"An addict alone is in bad company"

One participant talks of what he calls the “Greater Power” and it is something of a recurrent theme in the Narcotics Anonymous, and can also be called “God as we understand him“. It is a surprising element. Alcoholics Anonymous, which preceded Narcotics Anonymous, dedicates a whole page to this God on its website to try and make an important distinction: both groups consider the fraternity spiritual but not religious. Everyone is free to join with their own beliefs. “Principles go beyond indivualities”.
Mutual help is at the heart of the movement, whether in the form of a greater power, God or a sponsor. “Trying on one’s own to be abstinent is very dangerous, it is like jumping from a plane without a parachute.”

Members are not required to be sponsored, even if it is keenly encouraged. The link between a member and his or her sponsor can be very strong. Some of them call each other every day. The telephone helpline run by Narcotics Anonymous is not specifically designed to bring daily support to addicts. The helpline is there for people who are looking for general information, for those who wonder whether they should join or not, and for relatives seeking help. These relatives and friends can also find support in a special dedicated group (Nar-Anon Family Groups). The everyday support comes from the sponsor in the form of specific encouragement: resist a craving, express an emotion, overcome a problem in everyday life.

At the end of the meeting, the hat gets put back on the table and all the participants get up, form a chain and chant together the 'Just For Today' text. Then once the chain dissolves the addicts hug, pat each other on the back, continue earlier conversations. Narcotics Anonymous refers to itself as a fraternity, and a visit to a meeting helps understand why.

To respect anonymity, quotes are not attributed.