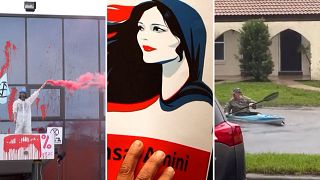 This week, activists from Attac and Extinction rebellion blocked a terminal at Le Bourget airport, France, to denounce "the climate crimes of the ultra-rich" who use private jets.

This week, activists from Attac and Extinction rebellion blocked a terminal at Le Bourget airport, France, to denounce "the climate crimes of the ultra-rich" who use private jets.

President Joe Biden issued a major disaster declaration for Florida after a powerful Hurricane Ian left a path of destruction in parts of the state’s southwest. Yet, some people have managed to take advantage of the situation, and are continuing their daily routines.

Feminist organisations protested worldwide over the death of Mahsa Amini in Iran, who was arrested in Tehran last week for allegedly wearing her Islamic headscarf too loosely.

In the meantime, volunteers in London's Green Park removed flowers from the floral tribute site for Queen Elizabeth II.

Tens of thousands of spectators gathered in southern Vietnam for the annual Bay Nui ox race, in a muddy festival of fun.