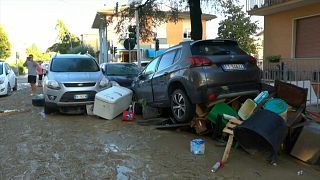 Emergency services initially put the death toll at seven, but by mid-morning it had risen to 10, the AGI news agency said, citing local authorities.

Firefighters said 300 people were working on the floods and that "dozens of people" had been rescued overnight after taking refuge on the roofs of houses and in trees.

The worst affected area was Ancona, an Adriatic port city, where neighbourhoods were without electricity and telephone services. Schools were closed on Friday in the affected areas.

Streets in the port city of Senigallia, further up the coast, turned into rivers, while aerial images of the inland hamlet of Pianello di Ostra showed mud-covered streets and cars piled up after being washed away.