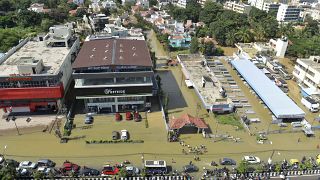 Large parts of India's IT hub Bangalore are under water, with authorities deploying rubber dinghies to ferry people around. Floods blamed on shoddy infrastructure cripple the city with employees in the huge tech sector told to work from home and dozens of areas reportedly left without drinking water.

Villagers displaced by flooding in southern Pakistan on Tuesday said they had received no aid after being forced to flee their homes.