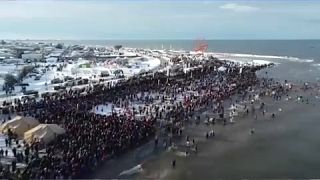 Punta Arenas, the southernmost city in the world, dawned under 10 centimetres (almost four inches) of snow and sub-zero temperatures. But that didn't stop 5,000 people from swimming in the waters of the Strait.

The wild initiative started as a joke of six young people 15 years ago and has now become a national and international event.

Led by the Mayor of Punta Arenas, Claudio Radonich, people of all ages, from all parts of Chile and from 15 different countries, converged on the Strait of Magellan.

After singing the Chilean national anthem, they ran into the water, ignoring the cold.

The adrenaline boost left many already looking forward to returning in 2023.