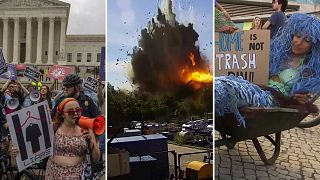 This week has seen some tragic moments, but some uplifting ones as well.

On Monday, a Russian missile hit a shopping mall in Kremenchuk, Ukraine, killing at least 18 people.

A rare tornado hit the town of Zierikzee in the Netherlands on Monday afternoon.

Abortion rights defenders gathered outside the US Supreme Court in Washington D.C and in New York City to support women’s reproductive rights.

Around 500 protesters marched across Lisbon on Wednesday, taking part in what they called a "Blue March" to attract the attention of world leaders and decision-makers to ocean preservation.

American actor and director Sean Penn met with President of Ukraine Volodymyr Zelenskyy on Tuesday in Kyiv. Zelenskyy wrote on his social media page that Sean Penn was in Ukraine filming a movie about the war.