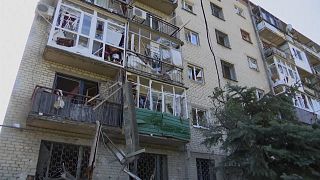 Emergency services worked to treat the injured and clear the aftermath of a strike on the Ukrainian-controlled city of Sloviansk on Monday.

Local authorities accused Russian forces of firing a cluster bomb at the city in the eastern Donetsk region, saying it hit a residential neighbourhood after dawn.

Authorities said the number of dead and injured are still to be confirmed.

A woman, bandaged and covered in blood, sat shocked by the road, waiting for paramedics to arrive.