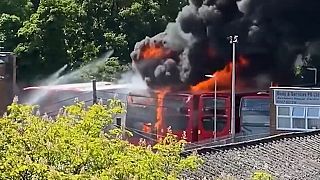 Six buses were damaged after flames engulfed them at Potters Bar, Hertfordshire, on Sunday afternoon.

"The cause and origin of the fire is currently under investigation and has yet to be established," Andy Hopcraft, deputy chief fire officer at Hertfordshire Fire and Rescue Service, said.