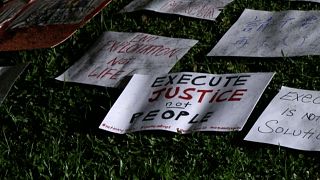 Hundreds of Singaporeans held a candlelight vigil on Monday to protest the looming execution of two Malaysians convicted of drug offences, as the United Nations urged the city-state to spare them.

Nagaenthran K. Dharmalingam, a mentally disabled man arrested in 2009 for heroin trafficking, is to be hanged on Wednesday despite an international outcry.

Another Malaysian, Datchinamurthy Kataiah, is scheduled to be executed two days later, according to campaigners.

More than 400 Singaporeans gathered late Monday at "Speakers' Corner" in a downtown park, the only place in the tightly controlled city-state where protests are allowed without prior police approval.

"No more blood on our hands", the crowd chanted, as well as "justice" and "freedom".

It was the second sizeable demonstration in Singapore -- where protests are rare -- in a few weeks against the death penalty.

Dharmalingamn was arrested at the age of 21 after being found with a small bundle of heroin and lost a last-ditch appeal against the death sentence last month.

Supporters say he has an IQ of 69, a level recognised as a disability, and was coerced into committing the crime.

His case has sparked widespread criticism, including from the European Union and British billionaire Richard Branson.

Kataiah was arrested in 2011 and convicted on drug trafficking charges.

Speaking on the sidelines of the protest, his sister Sathirani told AFP she was "shocked" her brother will be hanged as he was a small-time courier.

"He feels that the punishment is not fair," she said.

Singapore last month carried out its first execution since 2019. Alongside the two cases this week, activists fear there could be more hangings in the coming months.

The city-state maintains the death penalty for several offences and insists it has helped to keep Singapore one of Asia's safest places.