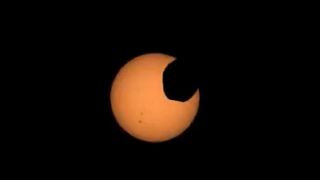 NASA’s Perseverance Mars rover captured footage of Phobos, one of Mars’s two moons, crossing the face of the sun on April 2, NASA said.

In a press statement, NASA said the eclipse lasted a little over 40 seconds, much shorter than a typical eclipse event involving Earth’s moon, and was captured on Perseverance’s Mastcam-Z camera.

The video is the most zoomed-in, highest-frame-rate observation of a Phobos solar eclipse ever taken from the Martian surface, the agency said.

NASA said: “These observations can help scientists better understand the moon’s orbit and how its gravity pulls on the Martian surface, ultimately shaping the Red Planet’s crust and mantle.”