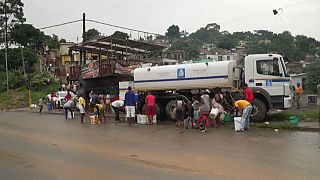 Demonstrators blocked the street with rubble and burning barricades to demand that city authorities repair damaged infrastructure that left them without running water or power for days, they say.

Devastating floods killed 259 in and around the South African city of Durban, a senior government official said Wednesday, after hillsides were washed away, homes collapsed, and more people were still feared missing.

According to Reuters, the death toll from days of flooding on South Africa's east coast rose to 395 on Friday, up from an earlier estimate of 341.

The heaviest rains in 60 years pummelled Durban's municipality, known as eThekwini. According to an AFP tally, the storm is the deadliest on record in South Africa.

The search for missing persons is still going on, President Cyril Ramaphosa said, promising to "spare nothing" in dealing with the disaster.