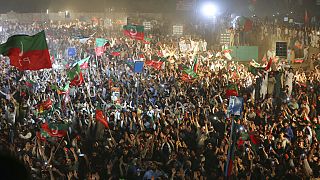 Supporters of former Pakistani Prime Minister Imran Khan attended an anti-government rally, in Peshawar, Pakistan, early Thursday, April 14, 2022. Thousands of supporters of Khan's Pakistan Tehreek-e-Insaf party rallied to accuse the country's new leadership of being an 'imposed government' that colluded with the US to oust Khan. Khan claims Washington opposes him because of his independent foreign policy favoring China and Russia.

Khan was dismissed Sunday after losing a no-confidence vote, paving the way for an unlikely alliance that faces the same issues which bedevilled the cricket star-turned-politician.

Pakistan lawmakers on Monday elected Shehbaz Sharif as the country's new Prime Minister following the weekend ouster of Imran Khan, who resigned his national assembly seat -- along with most of his party members -- ahead of the vote.