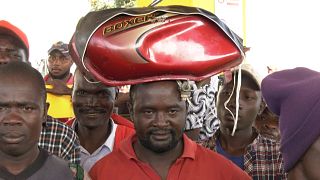 Kenya: Long queues at petrol stations due to fuel restrictions

Kenyan motorists endured another day of major fuel shortages on Monday, with queues lasting hours and strict rationing at petrol stations as pumps ran dry across the country.

The government blamed hoarding and panic buying for the queues at petrol stations, which worsened over the weekend, but oil dealers said the state owed them outstanding subsidies.

The shortage began last week in western Kenya following a dispute between oil marketing companies and the government over subsidy payments, sources said.

The government pays oil suppliers to subsidise pump costs for motorists, but the companies said they were waiting for four months of outstanding payments.

Under an agreement with the government, retailers have capped the price of petrol this month at 135 Kenyan shillings ($1.17, €1) per litre.

Black market operators, however, are reportedly selling at 160 shillings because of the shortage.