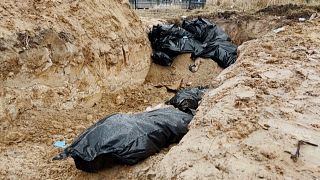 Ukraine: Dozens of bodies lie in a mass grave in Bucha

Ukraine and Western countries accused Russian troops of war crimes on Sunday after the discovery of mass graves and "executed" civilians near Kyiv, prompting promises of action at the International Criminal Court.

Britain, France, Germany, the United States and NATO all expressed horror at Ukrainian reports on Saturday of nearly 300 bodies lying in the street in Buca, some of which appeared to have been bound by the hands and feet before being shot.

US Secretary of State Antony Blinken called the killing a "punch in the gut", while NATO chief Jens Stoltenberg said the violence, unseen in Europe for decades, was "horrific" and "absolutely unacceptable".