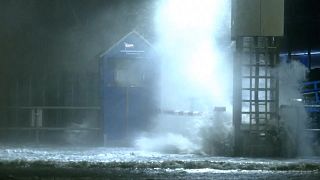 Northern Germany was hit by strong winds and a tidal surge overnight into Sunday as storm Nadia moved in, severely restricting rail and road travel.

In Dagebuell on the North Sea coast, the storm surge hit particularly hard, drawing in a crowd of onlookers.

The storm system, which is known as Nadia in Germany and Malik in other countries, has severely affected northern Europe over the weekend and is now moving eastward.