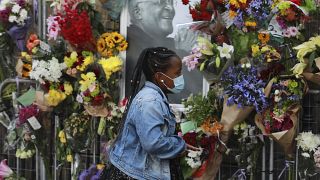 A service was also held close to Tutu's former home in Soweto, where officials including the mayor of Johannesburg paid tribute to the Nobel Peace Prize-winning icon.

People around the globe have been mourning the man viewed as South Africa's moral conscience following his death on Sunday at the age of 90.

Tutu was an uncompromising foe of apartheid and a modern-day activist for racial justice and LGBT rights.

"We were blessed as a nation, South Africa, to have had a man of this caliber live and walk in our midst."

During the service, Phalatse along with other guests and church officials lit candles and laid several wreaths in tribute to the former clergyman.

Tutu worked passionately, tirelessly and non-violently to tear down apartheid — South Africa's brutal, decades-long regime of oppression against its Black majority that only ended in 1994.

He used his pulpit as the first Black bishop of Johannesburg and later as the Anglican Archbishop of Cape Town, as well as frequent public demonstrations, to galvanize public opinion against racial inequity, both at home and globally.