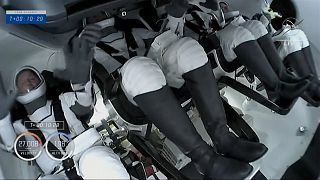 A SpaceX rocket carried four astronauts toward orbit Wednesday night, including the 600th person to reach space in 60 years.

The launch, which had been delayed nearly two weeks, puts the one German and three U.S. astronauts at the International Space Station to begin a six-month stay.

They should have been up there to welcome the station newcomers, but NASA and SpaceX decided to switch the order based on Monday's ideal recovery weather in the Gulf of Mexico.

SpaceX has now launched three crews for NASA in the past one-and-a-a-half years. The September flight was chartered by a billionaire for himself and three others.