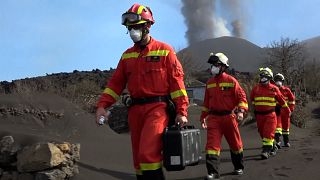 Almost six weeks after a volcano erupted on the Spanish island of La Palma, vast amounts of ash and lava continue to cover buildings and farmland.

Workers from Spain's military emergency unit (UME) could be seen working in the exclusion area on Friday, taking pictures with a drone.

Officers also filmed some signs of life with animals trying to survive the apocalyptic conditions in the area nearest to the volcano.

Flows of molten rock from the Cumbre Vieja volcano itself have caused the evacuations of about 7,500 people and destroyed more than 2,100 buildings, mostly homes.

No deaths have resulted from the eruption.

Other than in an area on the island's western side, life continues as normal for La Palma's 85,000 residents except for having to clean up volcanic ash.