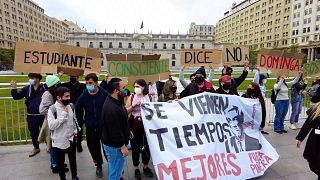 The decision of the prosecutor's office to open an investigation follows new revelations about the Dominga mine in the Pandora Papers leak that uncovered how the rich and powerful have been hiding their investments and assets.

The president's comments came as dozens of protesters gathered in front of the presidential residence, calling for protection of the native marine species and the environment near the mining area.

They carried signs and an effigy depicting Piñera, who they said should be jailed.

Leaked documents revealed that Piñera, one of Chile's wealthiest men, used offshore companies in the British Virgin Islands for dealings involving the Dominga mining project, which his family co-owned in part with a friend.

According to the report, the sale of the project in 2011 was conditioned not to cause environmental damage.

The government, at the time headed by Piñera, declined to name its location as a protected natural reserve.

The criminal investigation will follow on charges of alleged bribery and tax crimes derived from the sale of the mining project.

Piñera said he had never participated in the management of the Dominga mining project and did not "share" the decision of the prosecutor's office because it was already known and a previous investigation closed.

Ignacia Henriquez, spokesperson for the student federation, said the protesters were against using the environment as a "bargaining chip" for businesses benefitting Piñera and those close to him.